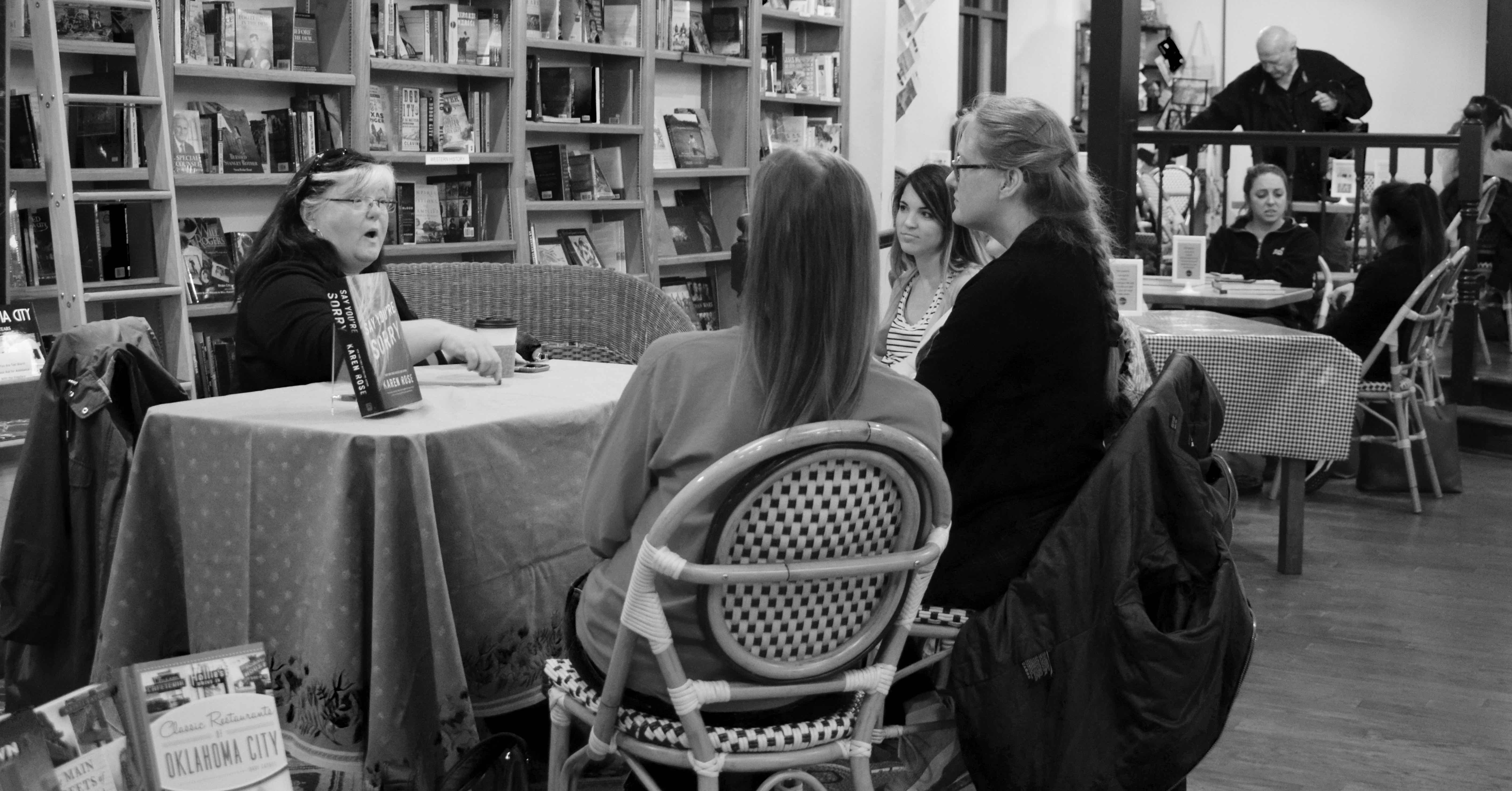 Story and photo by Jenna Lowrance

“Writing a book is like giving birth, it sucks while you are doing it and while you’re trying to work on it. It’s having swollen ankles, morning sickness, and all the problems that come with being pregnant. Then you give birth to this big beautiful book and it’s wonderful, and you think the whole experience couldn’t have been that bad, I’ll do it again,” author Karen Rose say.

A  No. 1 international and New York Times bestselling author, Rose, has given birth to more than twenty novels. To promote the release of her latest novel, “Say I’m Sorry,” Rose held an event February 21st in Oklahoma City.

Rose started writing as a hobby, and for fun, but soon found she was hooked.

She first began writing women’s fiction with romantic elements, until she signed with her first agent. Rose’s agent recognized Rose’s talented, suspenseful voice and suggested she think about writing suspense novels. Since Rose always had a knack for cracking crimes in books and movies, she gave it a shot.

To further her writing skills, Rose revisited the books she had difficulty solving. “I read backwards from chapter to chapter because what I was looking for was where they were putting the clues. I deconstructed it,” Rose said. By doing so, she realized the clues were in plain sight all along, but she cared too much about the characters to look for or notice them.

“Each time I learned something new about the process,” Rose said, “because I had a full-time job and this was just for fun really, it wasn’t a huge pressure to do this long-extended journey, kind of teaching myself what I wanted to write.”

Each book written by Rose was inspired differently.

Her latest novel, ‘Say You’re Sorry’ was inspired by her persistence to write a book about a methodical serial killer, which she finally determined was time for.

The killer in the book is actually based on a man she met on an airplane. He was a pilot for a company that was half charter services and half timeshare.

“He said, ‘It’s really great. I’m single, I have no responsibilities. I can be in Barcelona in the morning, Paris in the afternoon, and New York City at night.’”, Rose explained, “I told him, you would make the perfect serial killer because there would be no connections.”

‘Say You’re Sorry’ introduces the first book in the new pulse-pounding Sacramento series about a serial killer on the loose, preying on vulnerable women. The story is told from the heroine’s point of view, Daisy Dawson, who pops up as a character in other books. Dawson becomes the serial killer’s next victim, but she fights back and is able to break free.

Before fleeing the scene, Daisy manages to grab what proves to be crucial evidence: a necklace from around the killer’s neck. The necklace is more than a trivial item—it is a link to a cold case that Special Agent Gideon Reynolds has been tracking for seventeen years. With Daisy’s help, Gideon finally has the opportunity to get closer to the truth than ever before, but they might not get the chance, as the serial killer has a new target: Gideon and Daisy.

The process of writing a book does come with its struggles though.

For Rose, the hardest struggle she faced in creating ‘Say You’re Sorry’ was writing the villain scenes. Sometimes while Rose is writing, she doesn’t feel strong enough to write a villain scene, and will save it for another day.

“I leave all the villain scenes for a day because I become very irritable and mean, I yell at people and I don’t want to put that on my family,” Rose said, “So I go someplace quiet and work by myself and by the time I come back to my family I’m me again, I’m nice again.”

However, the benefits of being an author constantly outweigh the struggles.

Even being as successful as she is, Rose continues to remind herself before writing every book, that it’s never about getting it right the first time, she can always fix it later, and to never write to be published because it’s a pressure that doesn’t need to put on one’s self.