Professional Wrestling: Escapism for Everyone 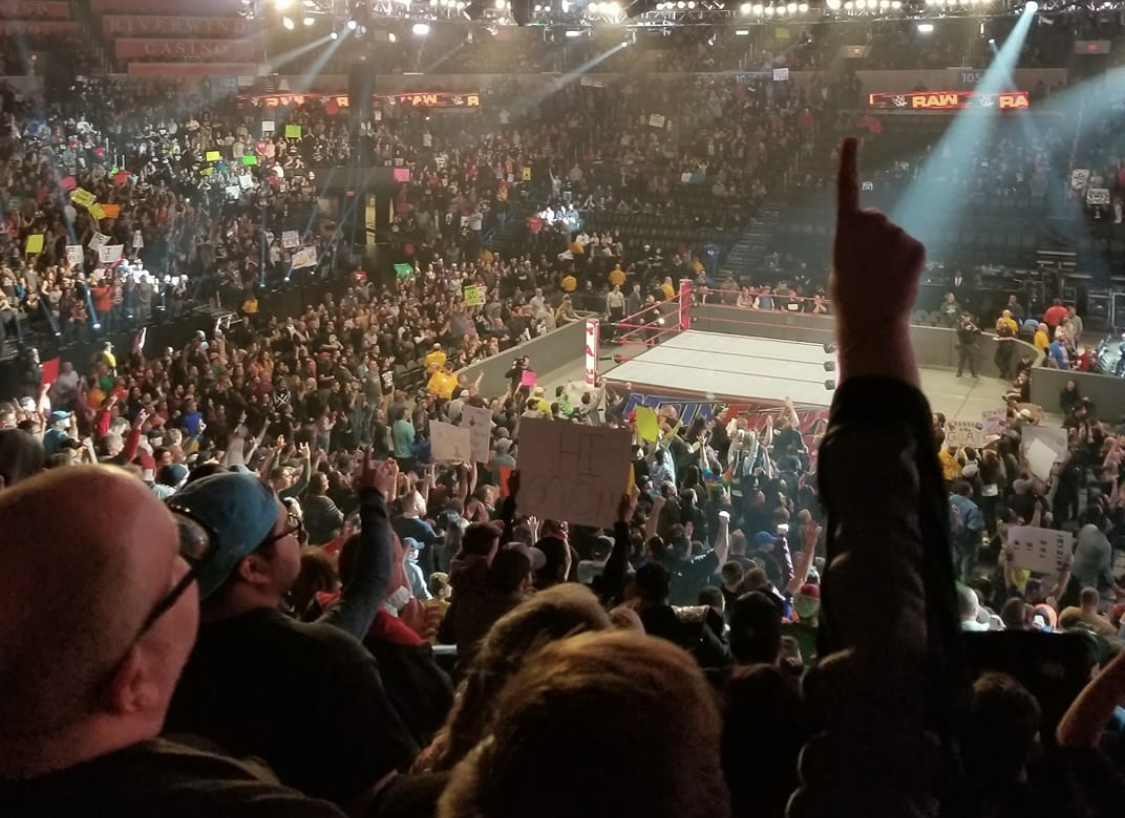 The world is not short on giving people reasons to desire a temporary
escape. Be it personal problems, overwhelming societal drama, or simply the weather. Luckily for fans of professional wrestling they get to experience all forms of escape in one package, and 2019 started off with exciting news for the massive audience.

Escapism takes on many forms, anything from exercise to painting to cook-
ing a meal for loved ones serves as an escape for people.

But, perhaps the most engaging and enthralling is spectacle.

Spectacle in the form of live entertainment such as sports, concerts or theater are time-honored guarantees of providing mental escape. And even more accessible is the silver screen or weekly cable programming. Even still there is YouTube and social media that are fast acting, quick fixes for escape.

Mitch Macoy is a semi-local professional wrestling personality. He has been
performing in some capacity in the wrestling industry for over 4 years. He is currently honing his craft as the in-ring announcer for Heroes of Wrestling in Royce City, Texas.

Professional wrestling at its best is a comic book come to life: men and
women with flamboyant costumes, super hero abilities to endure immense
amounts of pain, and the creativity to find signature ways of delivering it.
Local wrestling fan Tyler Cordingley has been a fan of pro wrestling since
he was 9 years old. “My family didn’t have cable but Smackdown was on UPN and my dad was flipping channels and left the television on a segment featuring Edge and Christian and the Hardy Boyz and I was immediately hooked.

Jeff Hardy from the start is what got me interested due to his unique look.
And then, guys like The Rock and Stone Cold just solidified my interest in wrestling.”

Cordingley’s lasting fandom was won over at a young age by the larger
than life characters portrayed. It has carried over into adulthood to help him through his struggles.

“I have a busy life with a demanding job and two kids,” Cordingley says,
“It’s easy to escape into wrestling because there is something for everybody, and there is endless new content to find. When there is a great match that has the right timing and the right crowd there is nothing better to watch in my opinion.”

Macoy says he grew up in a family of pro wrestling fans. “From my father
and mother, to my older brother and cousins; we were all entranced by the spectacle that was professional wrestling. The lights, pyro, music, announc-
ing, commentating, the larger than life characters beating the tar out of one another.”

Wrestling blends together many common forms of spectacle to create a
high drama feeling. It gives fans something to invest in outside of themselves during the duration of the televised shows or live event.

Macoy says, “It was a sport to me as a child, a sport that had a Super Bowl
every Monday night.”

fandom,” Macoy says, “Even growing up in a family that was so fond of wrestling, I’m viewed as a failure because of my career and life choices. When I’m out there performing or watching others perform that all goes out the window; I could care less what the people around me think; this is what makes me happy.”

Macoy’s duty as a performer gives him even more escapist opportunity by
venturing into the unknown of his character. It is up to him and the rest of
the talent and crew to give fans something to clutch onto during the show
and after.

“In the totality of performing I’d have to say our responsibility is to leave
the fans wanting more,” says Macoy. “For me as a child it was always an
escape from what was going on in my real life; I like to believe that we give
people that escape, not just for the few hours they’re live at the show, but for the days after and days leading up to the next show, they’re engulfed into what we’re doing just as much as we are.”

Through his character portrayals Macoy says, “I’m escaping those people
that always told me what to do and how to do it. I’m escaping the thought of working a 9 to 5 the rest of my life just so I can make enough money to putfood on the table, clothes on my back , and a roof over my head. I’m escaping the guy who earned a bachelor’s degree in less than three years just for his parents not to show up at the graduation ceremony. I’m escaping the day when I’m older and I tell my children you can do and be anything you want to; damn well knowing I didn’t give my best shot at being and doing what I always wanted to.”

Though Macoy works locally, there is a global brand that broadcasts weekly, World Wrestling Entertainment.

Since the year 2001, when WWE purchased its biggest rival, World Cham-
pionship Wrestling (WCW), the WWE has been the industry leader in producing wrestling content for the masses. Monday Night Raw has been
running weekly on syndicated television networks since January of 1993. The company has also been running Smackdown, now on Tuesday nights, since April of 1999. Both live broadcasts are consistently in the top of the weekly rating charts.

For the week of January 15, 2019, “Monday night cable ratings were domi-
nated by both USA and the WWE. Monday Night Raw took home the top three slots across the three hours of its broadcast, maintaining a 0.9 rating the entire night. This was consistent with its normal performance, and a match with the previous Monday’s score,” reported by Vbythenumbers.com.

Even though Monday Night Raw is on the top of the charts consistently,
the overall rating has declined over the last twenty years. The Nielsen ratings for the Monday Night Wars (a ratings war between WCW and WWE when they went head-to-head broadcasting Monday Nitro and Monday Night Raw on opposing networks from 1995 to 2000) show an average of around 4.0 for both shows with peak weeks reaching over 8.0.

“Once the WWE eliminated their competition, their storytelling and in-
ring product suffered. It’s gone through many changes since the end of WCW, and I believe the wrestling is the best it’s ever been, but the storylines haven’t been the same since the end of the Monday Night Wars.”

But on January 1, 2019 the wrestling landscape received a much needed
shot in the arm with the announcement of All Elite Wrestling (AEW).
“We in the Elite have a saying, ‘Change the World.’ Sometimes to do that
you have to change the world that you live in, and since my first breath I have lived in the world of professional wrestling,” Co-vice President of AEW Cody Rhodes said in a press conference addressing fans on what to expect with AEW in Jacksonville, FL on January 8, 2019.

Rhodes is flanked by The Young Bucks, a brother tag team, together making
a team of three Vice Presidents for AEW. Rhodes, son of Dusty Rhodes, spent some time in WWE before asking for his release from contract to pursue his own creativity. The Young Bucks have made names for themselves on the independent circuits rivaling WWE talent, a feat that was considered nearly impossible until recent years.

The WWE is known for its use of Hollywood writers while the independent
circuit is more individually driven.

Macoy says, “We’ve honestly been in a bit of a boom period on the inde-
pendent scene these last few years; now what The Elite are doing is taking that knowledge of what’s been happening independently and putting it on a global scale; they have the financial backing, the fans approval, and the opportunity to put together a roster that not just rivals WWE but, many would say is going to be superior than WWE’s.”

Co-owner of the Jacksonville Jaguars and long-time wrestling fan Tony
Khan is the President of the new company. “It’s going to be competitive. Even if it’s competitive within I think it’s going to be healthy, it’s going to breed healthy competition and really respect the sporting aspect of [wrestling],” says Khan at the AEW press conference, “If we treat the performers and the sport as the legitimate athletic competition that
it is then, I think it will bring a lot of positive attention to the sport.”

“Competition breeds excellence. With the current state of the WWE prod-
uct and the announcement of AEW, it’s definitely starting to feel like we’re heading towards another war,” says Macoy. ”Just like the Monday Night Wars this will be a dog fight; were going to see quite a few names jump ship to AEW especially with them offering health care and we’re going to see a number of independent performers signed to big contracts by WWE just to keep them from signing with the competition. Wrestling is coming back to the spotlight, and there is going to be a lot of money to be made when it does.”

Cordingley says, “With them having the money to sign talent at competitive
rates, I think you will see a lot of talent from WWE jumping ship for good
money and what will undoubtedly be a lighter travel schedule. We could be
looking at the first financially viable alternative to WWE since WCW. I think that will play a role on if AEW will be real competition in the years to come.”

The company has announced a few of their initial contracted talents, one of
which shocked everyone. Chris Jericho has been a household name since the Monday Night Wars, competing on WCW Nitro until jumping battle lines to WWE Raw.

“Jericho transcends pro wrestling. My mom knows who Chris Jericho is.
He’s in a band, he’s hosted tv shows, he’s been on Dancing with the Stars.

He brings immediate credibility and name value to everything he does,” says Cordingley, “I think what makes him special and why he’s in that greatest of all time conversation is that he’s been wrestling since before the Monday Night Wars, yet he still performs at a high level and reinvents himself with every new opportunity. He could have just rode on the Y2J gimmick for his whole career and he would be fine, but he is still developing new characters for himself.”

Chief Branding Officer and wife of Cody, Brandi Rhodes, made a major an-
nouncement at the press conference regarding female competitors.

Brandi says, “We care about our women, they are top talent. So, they will be
paid equally. There will be no sliding scale.”

Which is very exciting to any females who aspire to become pro wrestlers,
like Tyler’s 8-year-old daughter.“In my opinion the best thing about the WWE since the end of the Monday Night Wars is how far the women’s division has come,” says Cordingley,

“What they are doing now will inspire a new generation of female wrestlers
because they know that they will be taken seriously in the ring. My daughter can invest in women’s wrestling now because there are real characters and there is real time being put into women’s wrestling.”
Macoy is hopeful that the competitive environment will bring even more
attention from more people to all forms of pro wrestling, including local
independent shows.

“I think all it can do is help bring wrestling back to the limelight. Once
wrestling is ‘cool’ again, which I think it will be in mainstream media’s eyes
a year from now, we will see an influx of fans attending independent shows,” says Macoy.

The culture of professional wrestling stands to gain a lot of momentum in
the years to come.

Everyone involved, from fan to performer, has a bright future to look for-
ward to. With the myriad of options for viewing either local, independent, the established WWE product, or up and coming organizations like AEW professional wrestling will be here to provide people like Cordingley and Macoy the escapism they crave.