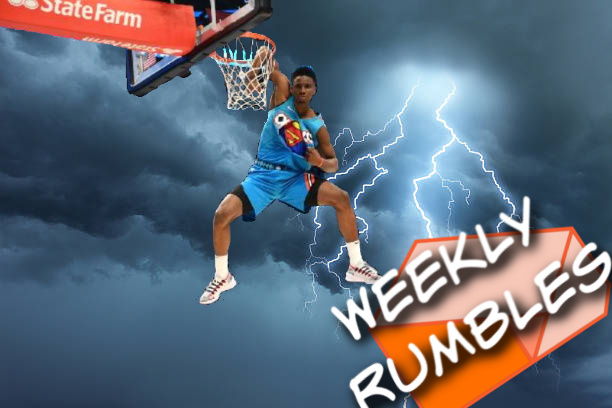 Hey there everybody and welcome to our first edition of Weekly Rumbles. Here we are going to shoot the moon with all things Oklahoma City Thunder, from game recaps, to upcoming previews, to things that are just plain fun from around the league. So strap in as we head out on this journey together for the rest of this NBA season.

The Thunder navigated a four game road trip this past week, splitting the games and posting a record of 2-2. This leaves Oklahoma City just one game out of the three seed in the lose column. Most importantly, the road trip saw the Thunder complete season sweeps of Portland and Utah, giving them the tiebreaker over both teams which could make all the difference in a once again packed Western Conference playoff picture.

Paul George’s anticipated return to the Thunder lineup was spoiled as the Timberwolves defeated Oklahoma City for the third time in three tries this season. The Thunder once again dug themselves a hole in the first half, trailing by 14 points at the intermission. Though fans were pleased to see George back on the court, he struggled from the field, knocking down just 8 of his 25 shots (including shootings 4-of-14 from behind the arc) and notching only 25 points. Karl Anthony Towns’ 41-point performance will have Thunder fans worried as the team’s streak of poor defense continued in Minnesota. One positive aspect Oklahoma City will take out of Minnesota is Russell Westbrook’s shot appears to be here for good, as he shot an efficient 15-of-28 for 38 points, while shooting 50 percent from three-point land.

Oklahoma City got back on track posting an impressive victory over Portland in overtime. The Thunder withstood a 51-point barrage from Trail Blazers all star Damian Lillard to secure their second win in Portland this season after not having escaped from Portland victorious since 2014. Westbrook led the team again with 37 points on 14-of-28 shooting, adding 8 points in the decisive overtime period. Though George finished with 32 points, he was greatly aided by his 17-of-20 shooting night from the free throw line. He only shot 30.4 percent from the field and was a dismal 1-of-9 shooting from three, continuing his concerning shooting stretch of late.

On the second night of their road back to back, Oklahoma City fell to the Clippers in a game that saw them spend the entire night in dire foul trouble. The Thunder were whistled for 36 fouls. The team finished with five players called for four or more fouls, including seeing Westbrook, George, and Steven Adams all fouling out. Lou Williams and Danilo Gallinari torched Oklahoma City, combining to score 74 of the Clippers’ points. Perennial thorn in the side Patrick Beverley also reared his ugly head for the Clippers, thoroughly frustrating George and holding him to just 15 points for the Thunder. Despite all of this, Oklahoma City put themselves in a position to win the game as Westbrook connected from three to pull the Thunder within one point with 1:24 left in the game. However, the foul trouble, paired with the tired legs, as a result of being pushed to overtime in Portland, were too much to overcome. The Thunder ran out of gas, and ultimately failed to close out the game.

Oklahoma City completed the season sweep of Utah and capped off their brief road trip with a win. The story of the night, of course, was the performance of Dennis Schröder who led the team in scoring with 25 points. No? Anybody? Okay so history repeated itself, as once again the headlines coming out of Salt Lake City are Russell Westbrook being filmed in a heated verbal altercation with a fan. After the game Westbrook said the fan told him to “get down on my knees like I used to.” The fan denies these statements, but the Utah Jazz released a statement saying “players and fans have a shared responsibility to create a safe and respectful environment,” and they would be conducting an investigation into the incident. Lost in all of this chaos was one of the better performances from Oklahoma City as of late. The Thunder led the way with stingy defense in the first half, including only allowing 16 points in the second quarter. Schröder really was key down the stretch too, as it seemed when every time the Jazz appeared to be poised to make a run, Schröder killed off any momentum with a huge bucket. Oklahoma City will hope to continue to put their best foot forward on the defensive end while George works through the shooting funk he is in.

Coming out of the all-star break, there were no allusions as to the road ahead for the Thunder’s stretch run. Oklahoma City was slated with one of the toughest run-ins to close the season, and this upcoming week is no different. The Thunder returns home for the first game of a back-to-back Wednesday against the Brooklyn Nets who enter the Chesapeake Arena, winners of four straight games. Westbrook and company then fly to Indianapolis to face the Pacers on Thursday night in what potentially could be a look ahead spot before returning home to host Kevin Durant and the Golden State Warriors Saturday night. The Warriors have dropped six of their last ten games, and have a tough road trip including visits to Houston, Oklahoma City and San Antonio to cap of the week. Oklahoma City will close out the upcoming week by hosting the Miami Heat who are currently holding on to the eighth seed in the Eastern Conference.

The Brodie of old appears to be back. Over the past week, Westbrook shot 50-of-98 for an outstanding 51 percent from the field. Even better than that, he shot 14-of-31 from three, punctuated by a ridiculous shot where he drained a three from the “U” on the court in Utah. All season long, everyone has said Westbrook is playing fantastic complimentary basketball with George, and if he could only find his shot again, the Thunder could make some real noise come playoff time. Well, good news everyone, his jump shot is no longer missing, and it appears just in time for the home stretch, Brodie has returned.

Since his reinsertion to the lineup, George’s shooting has been dismal compared to the MVP caliber season he has logged thus far. Over the past four games, he is shooting just 30.5 percent from the field and 23 percent from behind the arc. As always with George, shooting is only part of his game. Thunder fans will be encouraged that his poor offensive performances have not impacted his effort on the defensive end of the court, but they’ll be hoping his shot returns soon. George is historically a streaky shooter over the course of a season, but in the mean time, he has taken a back seat and is taking less shots while he works through his funk.

Morris was absolutely one of the best options in the buyout market, and if we don’t consider Paul George re-signing this summer, he may also mark the biggest free agent acquisition the Thunder have attracted. But, he has not played up to such billing quite yet. Now there are a few reasons that can account for this. First, Morris was coming off of a neck injury when Oklahoma City scooped him up. He had not played since the end of December, so he could still be getting back into the swing of things. Additionally, Morris was thrown into the fire, taking most of Patrick Patterson’s minutes in the rotation as soon as he was signed. He is still settling in with his new teammates and learning Billy Donovan’s system. The biggest disappointment in Morris likely stems from inflated expectations of what Oklahoma City was getting off of the buyout market. Morris was touted as added muscle and toughness to the defensive end of things, as well as the potential to get hot from deep in a hurry. While the latter may be true, Morris did not flash much of that defensive acumen in his previous stint with the Washington Wizards. Fred Katz, the Wizards beat writer for The Athletic, wrote that Morris was “part of pick-and-roll discombobulation numerous times, showing off a tendency to end up in no-man’s land when guarding the back ends of ball screens.” This has been exactly the case so far, as Morris has looked lost on defense when the Thunder engage in lots of off ball switching.

Oklahoma City has a challenging week ahead. While George continues to do some soul searching with his shot, Brooklyn and the Pistons are not to be taken lightly, especially on a back-to-back. The big test of the week will of course come in the emotional battle with the Warriors. Golden State has looked as vulnerable as ever over the past ten games, and they will be desperate to get back to their dominant selves on their three game road trip this weekend. My prediction: Oklahoma City will pick up the win at home against the Nets, and proceed to drop the next two games. Until the Thunder can show they are committed to winning with defense like they had been doing to start the season, I find it hard to trust the consistency of this team, especially if George is going to continue to shoot the ball as poorly as he has over the past week.