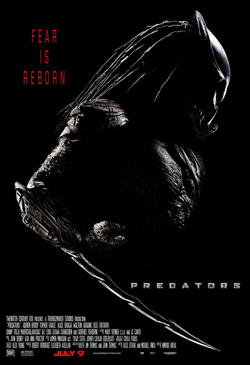 The newest installment of “Predators,” written by Robert Rodriguez and directed by Nimrod Antal, muscled its way into fans’ hearts July 9.

Despite having a small budget, the movie is great and breathes life back into the “Predator” franchise.

In the sequel to “Predator” and “Predator 2,” a group of humans find themselves on a foreign jungle world after being taken from Earth.

The humans are all cold-blooded killers ranging from a mercenaries, to soldiers and convicts.

The only exception to this deadly group of humans is a doctor named Edwin (Topher Grace) whose role is revealed as the movie continues.

Led by Royce (Adrien Brody), the humans soon find themselves hunted by and fighting for survival against a race of high-tech, hunter aliens called Predators.

Brody gives a solid performance as the anti-hero, who reluctantly takes charge. The knowledge and skills he gains from hunting people as a mercenary allows him to understand how the Predators think and behave.

Grace’s character provides some dark humor, as it appears he has finally shed the Eric Foreman skin from “That 70’s Show.”

Laurence Fishburne’s role as Noland, a slightly insane human who has managed to survive for years on the planet, is very well done.

The movie takes its time getting started, and gives the viewers time to get a feel for the characters and see them as human beings, despite being cold-blooded killers.

When the Predators start killing off the humans, the audience is able to actually sympathize with the characters.

The movie builds up quite a bit of tension throughout its entirety, but when the ending comes, it’s less than climatic and leaves you feeling let down.

Despite this, the movie is a good watch for someone who’s not a fan of the series and a definite must see for fans.