Knocking the stuffing out of bears proves fun in video game 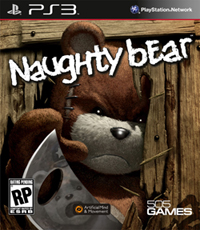 Take all the best parts of every slasher movie you can think of, throw in some teddy bears and the result is “Naughty Bear,” the hilariously macabre game released June 28 for PlayStation3.

The gamer plays the titular character, Naughty Bear, a teddy who’s tired of being made fun of and ignored by other bears on Paradise Island.

In retaliation, Naughty takes a butcher knife and sets out to slit his happy neighbor bears’ throats or tries to drive them insane.

“Naughty Bear” is a score-based game. The aim of the game is to get Naughty Points for destroying property, killing bears and driving them insane. Naughty Points also can be gained by completing side missions and fulfilling objectives.

The environment of the game is well done. A cartoonish style takes the emphasis off graphics, and the world is full of objects that can be destroyed, most of which can be used to kill bears in creative and violent ways.

To those with twisted minds, “Naughty Bear” is a laugh fest.

The narrator is dementedly cheerful. The bears bleed stuffing when stabbed, and the startlingly detailed looks on the bears’ faces when Naughty kills them are pure entertainment.

Unfortunately, the game has a couple of downsides. While playing a murderous teddy bear is vastly amusing, gameplay slows down once an area has been cleared of enemies.

There also are side missions that take quite a bit of time to complete, and the player can become frustrated as the score multiplier ticks down to zero while he or she struggles to find the last item needed to complete the objective.

The controls depart from the classic PlayStation setup, which can be annoying in the middle of combat.

Attack, defense, and some of the interactions are set to the R2 and L2 buttons, which can make for some interesting accidents.

For instance, reacting instinctively to stab a bear that’s trying to shoot, Naughty occasionally results in Naughty’s weapon being dropped, as the X button is used for picking up objects, instead of hitting things

“Naughty Bear” succeeds in that it’s funny and a great way to unwind after a stressful day at work.

Players looking for an in-depth gaming experience, such as the people who enjoy finding every last item, and getting the highest score possible should take a pass on this this game.

Otherwise, you just might take a cue from Naughty, and stab this game repeatedly.