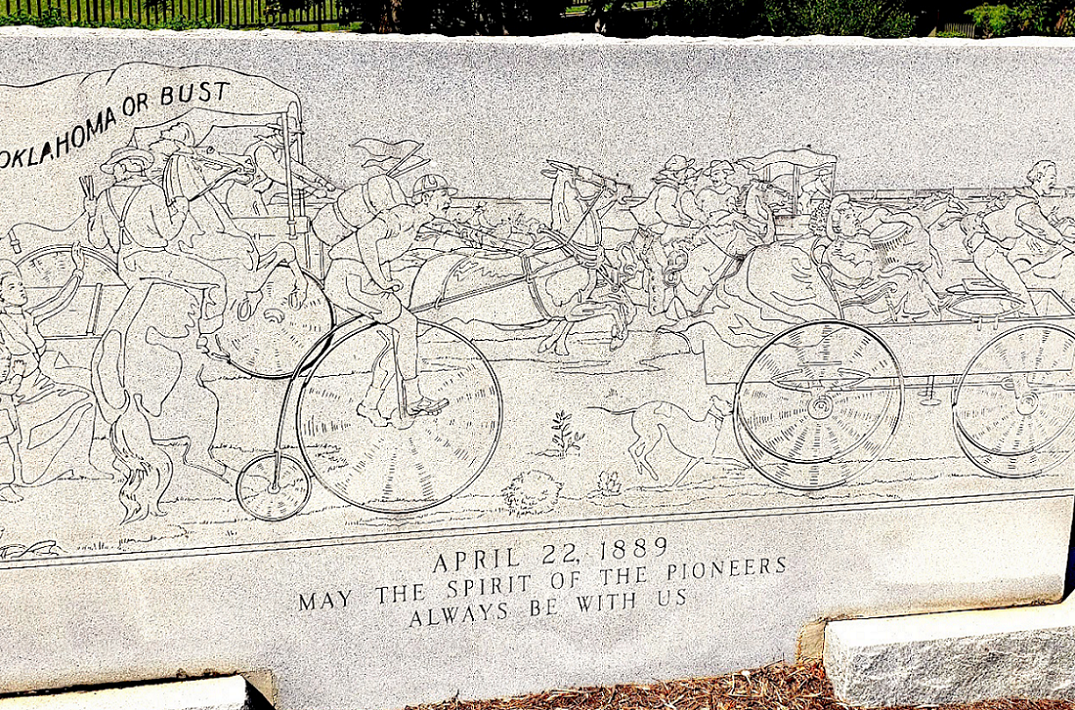 Responding to calls to have a monument celebrating the Oklahoma Land Run removed from campus, college administrators withdrew the display from public view during the winter break.

The large concrete slab monument, honoring the 1889 Land Run features groups of settlers on horse and buggy carriages, with a flag above them exclaiming “Oklahoma or Bust!” and a quote below them reading “May the spirit of the pioneers always be with us.”

The College administration said they made the choice because of threats of violence and letters to the editor of the Pioneer student newspaper.

In November 2020, the Pioneer published a letter to the editor submitted by a Native American employee pleading for the school to take a more critical look at the message of a monument displayed near the front of the school– just feet away from the Main Building entrance.

“I’ve worked at OCCC for a few years, and each year I can’t understand if the college doesn’t like Native Americans or is just clueless,” the employee, who wished to remain anonymous, stated in the letter.

By January, the monument was removed from its designated home at the school, where it has sat for several decades, and placed into storage.

The college’s swift response comes in a time where the new Executive Leadership Team for the college, Executive Vice President Danita Rose, and OCCC’s Interim President Jeremy Thomas, have both expressed their desire to change the culture of the school, following a controversial shift in administration in 2020.

“If our goal is to create a community that is inclusive and welcoming to everyone, a monument that depicts cruelty and oppression can’t be on display here,” Rose said in a press release issued last week.

Oklahomans are divided in their opinions of this decision, with some members of the community outraged at what they claim is an attempt to “erase” Oklahoma’s history.

“This is a disgrace. Don’t try to erase history. Grow a spine and say no to the cancel culture,” John Anderson wrote on Facebook after TV station KOCO broke the story.

Former OCCC English Professor Richard Rouillard expressed his own concern and said that he hoped the college had done its research before taking the monument down.

In contrast, other Oklahoman’s offered praise to the college for removing the controversial piece from campus.

“Hoping families who were victims to the land run (indigenous people were forcibly removed so settlers could live here) can finally find some healing now that this monument is gone. People seem to forget the dark history Oklahoma has,” Maegan Bryant wrote on social media.

Others agree with the choice the college made, and believe that OCCC has the responsibility to represent itself as an institution reflective of the student body it serves.

“…this is bigger than a piece of stone, folks. It’s about creating a community experience where all are represented and feel welcome. That’s important in an education setting. It’s important everywhere!” Audra Beasley said on social media.

Still, others challenged the idea that the college should take the complaints against the monument seriously, and discussed taking measures into their own hands to have the monument returned to campus public view.

“If somebody started a movement about being traumatized by monument removal, threw a couple of riots and stuff…. would they have to put them all back?” Donna Calloway said, in a public thread about the story on the KOKH Facebook page.

Leslie Jones, a history professor at OCCC and citizen of the Muscogee (Creek) Nation, said she has strong viewpoints about this issue.

“Monuments do not educate; they glorify. We must ask ourselves: What are these monuments celebrating? Who are they celebrating? And, who is being left out of the narrative?” Jones said.

“At OCCC, we emphasize the need for inclusivity and that all voices should be heard and celebrated in the narrative of our history,” she said.

According to OCCC administration, faculty and staff know very little about the monument and have openly questioned its purpose on the campus.

Pioneer staff have searched the newspaper archives and found no information about the artist of the piece or when it was installed at OCCC.

Retired English Professor Bertha Wise said she believes the monument was placed at OCCC in 1986.

However, Rouillard said he remembers the monument being on campus when the college went by the name South Oklahoma City Junior College.

Kelli Mosteller, Historian for Citizen Potawatomi Nation, said the Land Run of 1889 was a painful experience for Oklahoma Natives, despite the way it has been portrayed in history books.

“After three forced removals, we had to watch the land that was promised to be ours forever, land we purchased, disappear into the hands of non-Native settlers,” she said.

“This was a heartbreaking and traumatic experience for many of Oklahoma’s Indigenous communities,” Mosteller said.

She said she is excited to see OCCC making the campus more inclusive.

“I’m thrilled to see them make the decision to be a more welcoming institution for their Native students,” Mosteller said.

OCCC Interim President Dr. Jeremy Thomas said he has long supported the removal of this monument.

“We have always agreed with those who felt the monument was offensive and had no place on our campus,” Thomas said.

“It does not accurately reflect the respect, empathy and admiration we have for the true pioneers of this land: the indigenous people of this country, As soon as we were in a position to take it down, we did,” Thomas said.