Thunder season still one to remember 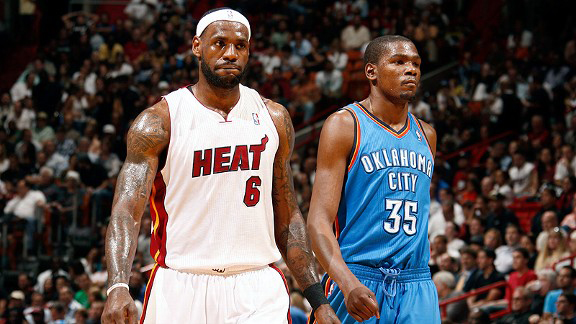 Losing is rarely a cause to celebrate anything in life, much less when it comes to basketball. The Thunder were officially ousted by LeBron and the Heat a week ago in the Finals – and while that may be disappointing on its own – looking back, it’s a testament to how good the season was for Oklahoma City, both the team and the city.

The beaten-down narrative of how young and inexperienced the Thunder is were lines no fan wanted any part of during the playoff run we just experienced. Most thought, “We’re not young anymore, we’ve handled the playoffs before. We’re ready to win. Now.”

Yet once you saw how the Heat closed out the Thunder, once you saw LeBron make “LeLeap” as Bill Simmons put it, once you saw Harden, Durant, and Westbrook taking in the loss together on the sidelines – you saw all at once that the Thunder just weren’t ready to become the NBA’s best team. That time is still to come, however.

The proof for that declaration is within the Thunder’s 62 wins (regular season and playoffs included) witnessed this year. For much of the regular season, the Thunder was the league’s best team. While home-court slipped away, the Thunder more than made up for it by reeling off four straight wins against the robotically designed basketball machine Spurs en route to the Finals.

Before that, the Thunder beat the league’s previous defending champions by sweeping the Mavs and kicking Kobe and the Lakers to the curb as well. In this playoff run we’ve witnessed the changing of the guard in the West; the Thunder is now the team that others will use as a benchmark for their success.

Individually speaking we’ve also seen the evolution of Kevin Durant, who just a couple weeks ago was crowned the king of clutch in the NBA. That will happen to you when you hit a couple game-winners over the course of the season in addition to scoring 16 and 17 points in the 4th quarter of games one and two of the NBA finals, which is the most all time.

For as maligned as Russell Westbrook is, the nation finally realized the power he possesses as he almost single-handedly led the Thunder to a game four win over the Heat with 43 points. Add that to the quickly developing offensive game of Serge Ibaka, the maturation of James Harden, and the defensive reliability of Sefolosha, Collison, and others and it’s clear to see why the future outshines the darkness that was the game five loss to the Heat.

While a championship was the goal – and a very realistic one at that – it would be nothing less than greedy to expect a team whose best players are all 23 and under to win an NBA title in only the team’s fourth year in OKC. Thunder fans probably don’t want to be comforted by promises of a successful future this soon after a Finals loss, but as the stages of grieving go, acceptance will come soon enough.