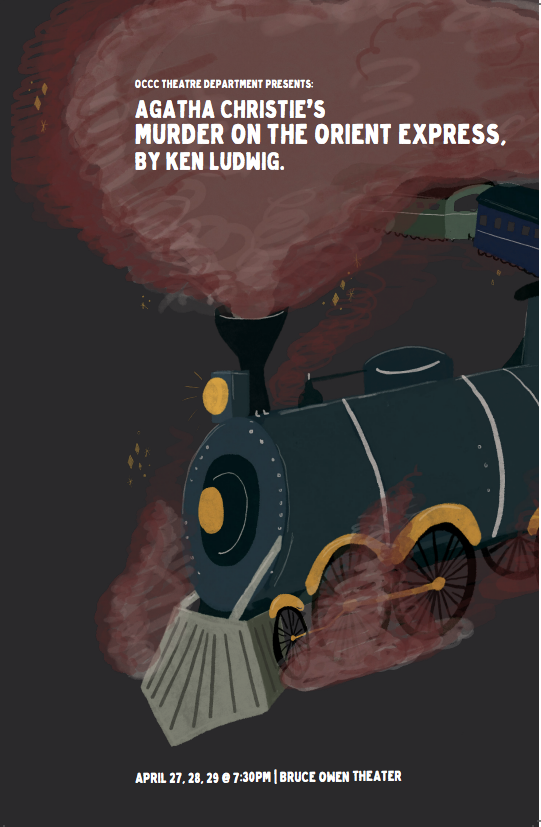 With the appearance of COVID-19, the United States has seen almost all large gatherings, including trips to the theater being put to a halt. However, one OCCC professor has thought of many creative ways to continue putting on safe shows.

Professor Don Russell has been a professor of theatre at OCCC since August 2019. He also serves as the theater chair. In this position, Russell is in charge of scheduling theater classes as well as the theater program shows.

This semester, with all the auditions nearing completion and the show fully cast, Russell and the theatre department are going to present an adaptation of Agatha Christie’s “Murder on the Orient Express”.

The performance will be performed live with limited seating in the Bruce Owen Theatre at OCCC 7:30 p.m. April 27, 28 and 29.

Tickets are on sale at https://occc.universitytickets.com

OCCC students get a free ticket.

“We do not know what the conditions of the world will be by the end of April. We plan for an in-person performance but are also keeping a constant focus on the idea that we could shift to a live-stream performance at any moment,” Russell said

“In a way, we are double rehearsing the show; one with a focus on live performances and a second with contingencies for a live-stream performance,” Russell said.

Double rehearsing the show is just one way the theatre program is changing its rehearsal process due to COVID-19. Professor Russell has also altered practice formats.

Russell said that fewer actors are allowed to rehearse during a given time, allowing for safe social distancing. Masks are also strictly enforced at all rehearsals.

Theatre Arts major Mikael Shatswell said he is very happy that OCCC has been able to perform during these unprecedented times.

“One of the things I’m most grateful for is the fact that we have still been able to produce shows during COVID. Many local theaters have been closed since February of 2020, and several closed their doors indefinitely. We’re lucky in that respect,” Shatswell said.

COVID-19 hit Oklahoma in March 2020 just as the theatre program was preparing for their spring show, an adaptation of the popular Shakespeare play “Twelfth Night”.

The uncertainty of the new virus caused the show to be canceled.

Russell said since the cast of “Twelfth Night” had spent the first half of the semester rehearsing and already knew their parts, he decided to move the performance to fall 2020 so the cast could perform.

Along with moving the show’s dates, Russell took some creative liberties in order to make the performance as safe as it could be.

“[The play] was originally set in the early 1920s, so what we did was we leaned into the idea of the 1918 Spanish Flu, so we performed it as if it were happening a few years earlier. So, everyone wore masks and it worked fine,” Russell said.