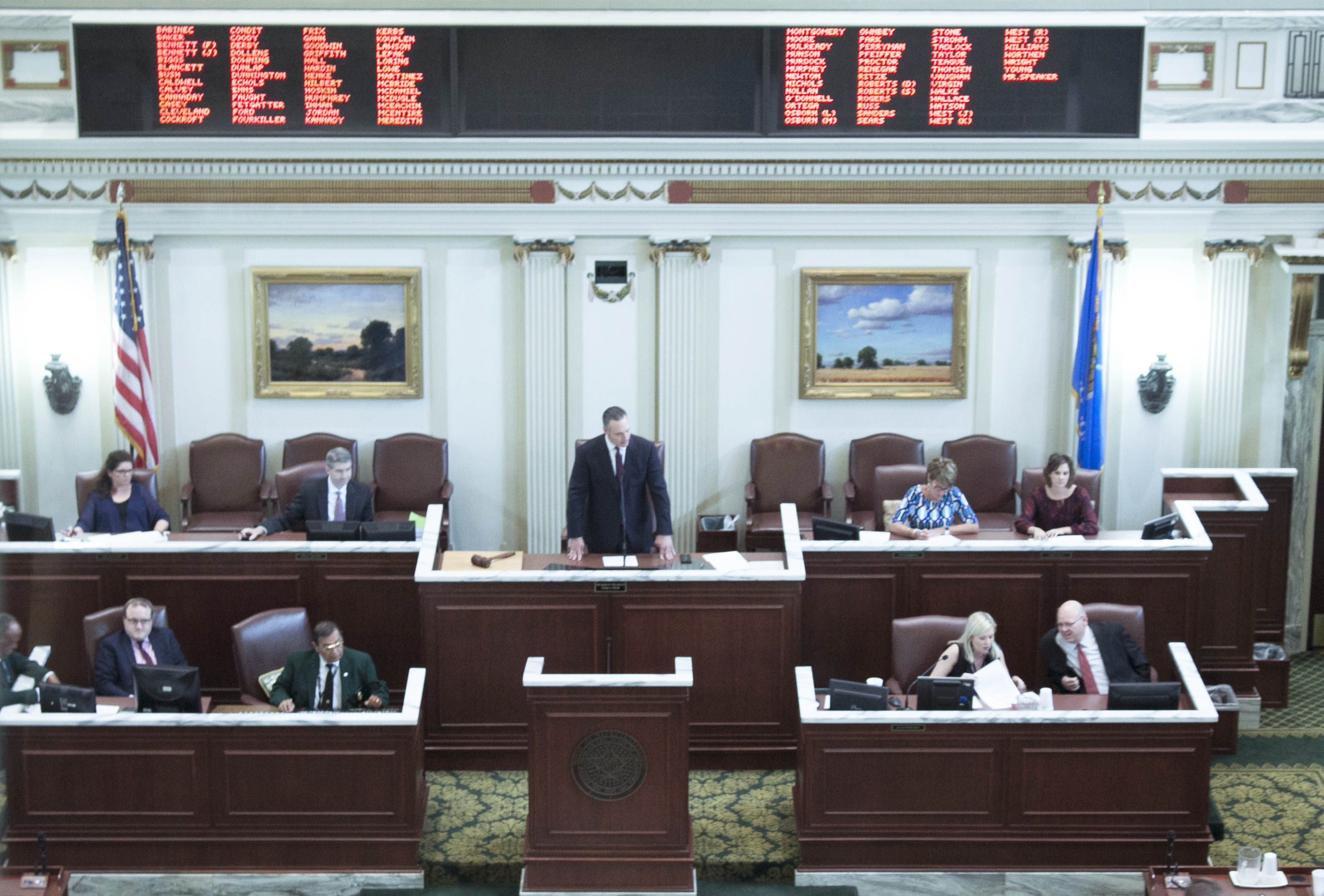 Oklahoma lawmakers aren’t the only ones who are attending this week’s special legislative session. The group, Red State Revolt, said it went to the State Capitol to protest the lack of funding for education, healthcare and other resources.

“The Oklahoma Legislature has sold its soul to big oil and gas, and even though our entire state is teetering on the verge of bankruptcy, they still refuse to pass taxes that make the richest corporations in Oklahoma pay their fair share,” Mark Faulk, a Red State Revolt member, said.

The current budget shows that, for the 2018 fiscal year, individuals taxpayers generate more than $1 billion dollars in state revenue meanwhile corporate tax is a steady $102 million. Individual tax has been increased by 1.2 percent since last fiscal year; corporate tax has remained the same.

Faulk said the group decided to attend the meetings to speak up about corporate welfare, and tax burdens placed on “Oklahomans who have nothing left to give.”

“Legislators are willfully bankrupting public education, mental health and other vital services so that Harold Hamm and Larry Nichols can add more money to their already obscene fortunes,” he said.

The Oklahoma Policy Institute said one option to deal with the $200 million shortfall was to end the capital gains exemption.

“Oklahoma allows a 100 percent income tax deduction on capital gains from the sale of property located in Oklahoma or the sale of stock of a company headquartered in Oklahoma,” the group said.

The tax break would benefit taxpayers who make over $1 million annually, OK Policy said. The organization said the exemption had questionable economic benefits and could also violate the commerce clause of the U.S. Constitution.

“It is time we send a message to our legislators, enough is enough,” Faulk said. “Stop listening to Harold Hamm, and Larry Nichols and start listening to people you represent.”

Claudia Swisher, Together Oklahoma, said she’s been watching the Oklahoma Legislature for years.

“I believe we need new revenues we got to look at all of the revenue sources, and I have always believed that paying taxes is is the price we pay for a Democratic Republic,” Swisher said.

She said corporations are benefiting from the public transportation, roads, so they should also contribute.

“It’s only fair in my mind that they would contribute to the betterment of state and of the citizen so absolutely I think we should stop those tax breaks,” she said.  “And raise gross production tax.”

Swisher said people argue that oil corporations such as Devon will move out of state, but she said Oklahoma has the fewest amount of taxes, and “we have all the oil.”

“They can’t drill a horizontal well long enough to go to another state and sorry all of the states around us charge more,” she said. “Even if we raised it to 7 percent we would still be below the lowest in our region.”

“Republicans are willing to do everything except take on the oil and gas industry,” Bennett said. “That’s what happened in regular session, instead of doing what’s fair, and equitable for every Oklahoman they chose to let in more regressive taxes.”

Bennett said this is why the Republican Party pushed for the cigarette tax last session. Republicans, he said, are doing whatever they can to avoid messing with corporate welfare.

“In other states the gross production tax is seven, eight, or nine percent,” he said. “In Oklahoma it’s two percent in the first three years then it goes up to seven percent.”

The problem with this tax, Bennett said, is by the time it’s two years the oil well is no longer of use.

“The life of a well is about two and a half years, so by the time our rate goes up to seven percent, which is a very competitive rate,” he said. “We’re taxing ten percent of the initial production.”

The Democratic Party has looked at other forms of revenue involving corporate tax, Bennett said, because generating new revenue is more efficient than cutting services.

During special session House Majority Jon Echols, R-Oklahoma City, introduced new members, but neither body did much during Monday.

Fetgatter said lawmakers have some decisions to make. “It depends on if we’re going to take off our Republican and Democratic hats, and do what the majority of Oklahomans want us to do.”

Fetgatter said 65 percent of Republicans and 68 percent of Democrats agreed on the cigarette tax, which was deemed unconstitutional last spring. He said there were other issues besides raising revenue and the special session has a minimum of ten days to handle those issues.

Republican Governor Mary Fallin told lawmakers they cannot cut any more services in Oklahoma, otherwise she will veto the budget.

“This special session is an opportunity for lawmakers to solve lingering, critical structural problems in our state budget,” Fallin said. “I am hopeful lawmakers will consider thoughtful, realistic solutions in a timely manner.”

She said that cutting any state agencies is not an option, neither is pushing the cigarette tax through a vote of the people, because it would not generate any current revenue.

“The earliest the issue could be decided by voters is June, the last month of the current fiscal year,” she said. “It doesn’t fix the budget hole because it would not generate any revenue for this fiscal year.”

Faulk said Monday’s session was a waste of taxpayer money. “I hope the Democrats stand united for a 7 percent gross production tax, but in all honesty I doubt that Republicans will even put GPT on the bargaining table.”