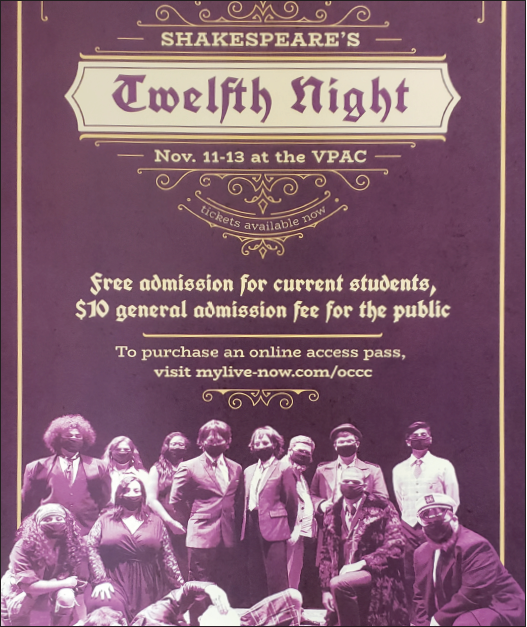 COVID-19 has prevented most in-person learning at OCCC, and canceled multiple community events.

However, the OCCC Theatre program is determined to bring more culture to campus and entertain audiences this month as they present “Twelfth Night” by William Shakespeare.

There will be no live audience; however, the performance will be live-streamed through MyLive at 7:30 p.m. Nov 11-13.

The tickets are $10 for non-students to watch the play virtually but free for current students and will be available on the Mylive website https://mylive-now.com/occc/ closer to the date of the performances.

Rehearsal for the humorous play has been one challenge that Theatre Department Chair and Professor Don Russell and students have faced due to the college’s COVID-19 safety restrictions.

Student and actor David Hoang said in normal times all cast would come to campus and be on stage and in the audience as their peers practiced.

“This [is not the case anymore] and, like shooting a film, we are restricted to only coming to rehearsals for our own scenes in order to accommodate the new restrictions on group sizes of gatherings,” he said.

Hoang said the changes in rehearsals could be good for a student who wanted to pursue film acting.

The show was set to run last spring, but was canceled due to the pandemic. Nearly the entire cast from the spring semester has been brought back for the show as well as some newcomers, Russell said.

Russell said it was very important to him the show stay as close as possible to when it was originally cast and rehearsed last semester.

“We were hoping to remount with as much of the original cast as possible so that all of the work the cast and crew had put into the preparations can be honored in some way,” he said.

Going from doing full show run-throughs to full on cancelation of the production was disheartening to the whole cast Hoang said.

“We were at a great position to come back from spring break and polish choreography, create the costumes and rehearse in-person with our respective scene partners to develop those creative and humorous moments that would make our version of ‘Twelfth Night’ an original rendition,” Hoang said.