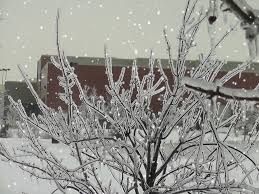 What is being called a historic and devastating ice storm closed the college at 10 a.m. Monday, and forced many students, professors and staff to go without power and internet throughout the night into Thursday.

It also forced the continued closure of the college until Friday as staff working remotely in essential roles found themselves with no power nor internet.

“In fact, many of OCCC’s core services are experiencing interruptions this week, including members of the Bursar, Financial Aid, Advising and Testing teams,” Provost Jeremy Thomas told the college in an all-college email.

Both students and professors were reminded through email by administration that they should be patient with each other.

Professors were asked to extend due dates “so that that students who lose power will have the opportunity to complete their work without penalty,” according to an email sent by Thomas Harrison, dean of Arts, English and Humanities.

Many professors are without power as well and likely didn’t get the emails.

Weather experts are comparing the Oct. 26 ice storm to one in December 2007 that brought most of Oklahoma City to a standstill and caused power outages for weeks.

Tuesday afternoon the on-campus scene was a mixture of ice-covered foliage and downed tree branches.

Dozens of trees were broken and bent along Faculty Circle with the most severe damage near the Arts and Humanities and Visual and Performing Arts buildings.

It was unknown by press-time if there os any structural damage to the college.

College administrators had hoped to reopen the campus Thursday. However, Facilities Management asked for another day to clear the debris.

The college has been in the midst of a beautification project for a handful of years.

Likely thousands of dollars spent has been destroyed by ice that coated trees, which were still covered with leaves, and brought branches down and split trees in two.

The Virtual Concert Series performance scheduled for Tuesday night was canceled It may be held in December, according to Lemuel Bardeguez, director of Cultural Affairs.

Staff administrators and faculty with power and internet will continue to work remotely. Campus buildings are expected to open again Friday.

At press time, over 220,000 Oklahoma City metro residents are without power, according to OG&E.

That number is only expected to go up Thursday morning and afternoon as wind gusts up to 40-mph are expected to break off even more tree limbs and down powerlines, according to News9.

Due to the magnitude of the storm damage, officials say it will take months to remove storm debris, according to KFOR.

This is a continuing story.

Tips for driving in icy conditions…