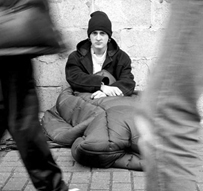 David Carmichiel, a man in his mid-50s, was a student at OCCC in the summer and fall of 2009. He also was homeless.

Carmichiel said his problems began in early 2009 when his trailer caught fire.

The flames spread to his motorcycle, destroying everything, leaving only him and his cat.

That, combined with the bad economy, he said, led to him falling through the cracks of society and becoming homeless.

Eventually, he said, he found a spot at Grace Rescue Mission in Oklahoma City, and the mission pushed him to enroll at OCCC.

That’s when Carmichiel talked to someone in OCCC’s Student Support Services to see what other help he could get, he said..

“They offered me access to organizations that could get me a job,” he said. “They had leads on apartments that would work with students. They also gave me bus passes to get to and from school.

“They were really helpful and have a lot of good advice,” Carmichiel said.

Mary Turner, learning support specialist, said she personally counseled 12 homeless students in the Spring 2010 semester, and several more have been seen by her colleagues.

“We have many homeless individuals going to school here,” Turner said. “We had a female student who lived in her old van with her daughters during the ice storm in February.

Turner said not everyone understands the plight of the homeless.

“There have been complaints about people dragging these big suitcases behind them when they walk the halls,” she said,

“But some of these people are taking everything they own in those suitcases.

“We have students who will show up to OCCC early in the morning and they’ll go and put everything they own into a locker, and shower and get ready for school,” Turner said.

“I would encourage students to contact our office if they have these needs,” Turner said.

“It’s tough with the economy and we can’t work magic, but hopefully we’ll be able to move them to the top of the list for subsidized housing,” Turner said.

A December 2009 study of hunger and homelessness from the City Mayors Society shows a 26 percent national increase in the demand of hunger assistance programs and a significant rise in the homelessness of families.

The study states that homelessness in America is the worst it’s been since 1991.

Carmichiel said he is grateful for the help he received.

“If you aren’t aware of the stuff [Student Support Services] offers, it’s really good information to find out,” he said.

Carmichiel decided to drop all his classes multiple times, but he has plans to start back to OCCC in the fall, he said.

In the meantime, he spends most of his days in the school library.

Carmichiel said he takes the bus to campus at 9 a.m. each day.

Then, he sits in the library and plays online computer games, leaving the college just long enough to eat at Grace Rescue Mission.

He said he no longer lives at the mission and sleeps at friends’ homes.

For more information or help, contact Student Support Services at 405-682-7520 or mturner@occc.edu.