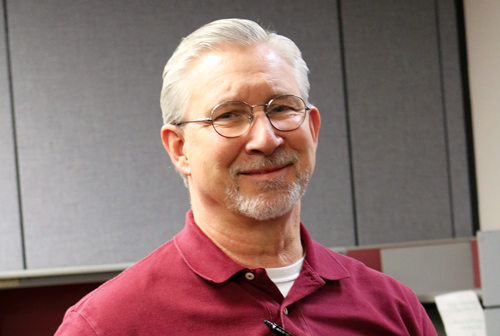 Adjunct history Professor Tom Easley says he always remembers the day when he thought he had killed a man in the line of duty. It happened in 1995, just two days after the Oklahoma City bombing.

Since then, after almost 32 years as a Norman police officer, Easley has retired and now is teaching two sections of American history at OCCC, twice the teaching load he managed while still working on the force.

His interest in teaching history arose after he completed his bachelor’s degree in law enforcement from the University of Oklahoma and started working as a Norman cop.

In 1995 he got hurt on the job. He said he twisted his ankle during a chase, but that’s when it occurred to him that he was in a field where it was possible he would get hurt a lot, maybe even lose an arm, a leg or an eye.

Easley said he can now laugh about the injury but it wasn’t so funny at the time.

“I was called out to Andrews Park in Norman because there was a man there who was, shall we say crazy and off his meds.

“He was doing everything from washing dishes to polishing the lawnmower at the same time.”

Easley was sent to corral the man.

“I was chasing him and went to jump over the drainage ditch, when my foot slipped and I fell into the ditch,” Easley said. “I couldn’t move for a moment. As I’m lying in the ditch, the man comes riding back by on a stolen pink bicycle and yells at me, ‘Hey I bet that hurt.’”

Easley said it was hard to resist the impulse to pull out his service revolver and shoot the guy.

That’s when Easley decided he needed a backup plan for his life.

Easley figured when he retired he didn’t want to do anything the law enforcement.

“I didn’t want to be a security officer or a bank guard, nothing in that field,” he said. “Not that law enforcement wasn’t good to me, but it was beginning to damage my health.

“From there I took the slow route. I took one class per semester for five years from OU and received my master’s degree in history in December 2000,” Easley said.

Easley said his most frightening experience in law enforcement was also one of the funniest.

“Because no matter how ugly, cops tend to put humor to everything,” Easley said.

He was called to a second story apartment just north of Campus Corner in Norman. It was April 21, 1995. He and another officer, Michael Thomason, arrived on the scene at about the same time.

They forced their way to the doorway of the bedroom where Shawn Metcalf was holding his estranged wife hostage with a knife.

He believed she was seeing another man, Easley said.

“I told myself if he brings the knife up, I’m going to have to shoot him,” Easley said. “Metcalf asked whose clothes were on the floor and wanted the closet checked.

“Officer Thomason opened the closet and a naked man ran out right past me.

“Metcalf pulled the knife up and I pulled the trigger,” Easley said. “I heard a distinctive pop. I figured he was dead.”

Easley said the woman ran past him saying “You didn’t have to shoot him.”

Then Easley said he heard Metcalf ask: “Where am I hit?”

“It scared me to death,” Easley said. The man did survive and the woman later thanked Easley for saving her life.

Easley said the department learned a lot from the experience. Easley said it was the only time he ever fired his weapon at someone.

The trauma was greater than he anticipated.

Today, Easley said, a police officer would be given several weeks off to process the event, but not in his case.

“I was off for only three days, and two of them were my regularly scheduled days off,” he said.

He knows trauma often is in the mix when the public comes in contact with the police.

“When most people encounter a police officer, they are not having a good day and we try to keep that in mind,” Easley said. “In fact it is probably the worst day of their lives.”

Easley said most police officers want to serve the community.

“I hate when a mother tells her child, ‘If you don’t behave that policeman will take you to jail,’ because we don’t want kids to grow up being scared of the police,” Easley said. “We want to be there to protect them.”

Easley said being a professor is harder than one might think.

“I did work as an undercover agent, worked narcotics, but teaching a night class is really brutal,” Easley explained. “After 9 p.m. everyone (in the class) starts passing out and I can’t keep them awake.”

Easley has been teaching history on campus about 15 years now and he said he really enjoys it.

Easley said he has been married to his wife, Rebecca, since 1978. She is a math professor at Cameron University in Lawton. They are talking about moving away, someplace they have never lived.

He said his long term goal is to do nothing full time.