Healthy banana split great for all 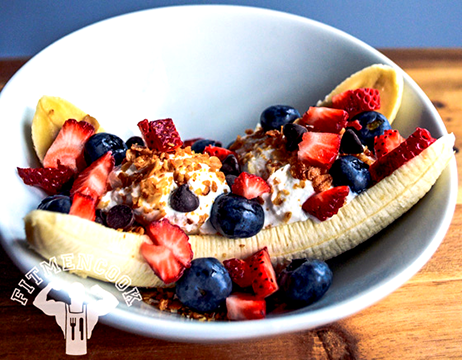 I had a banana split for breakfast. Now, before getting all judgmental about my choice to have one of the best desserts known to man first thing in the morning, let me just say that it wasn’t one of the delicious, mouth-watering banana splits.

There was still a banana along with blueberries, strawberries (but I was fresh out of that berry so I used raspberries), dark chocolate chips, and instead of the cold, creaminess of the God-sent ice cream, there was vanilla Greek yogurt and granola to take the place of the peanut topping. 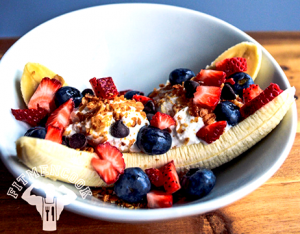 How could I ruin a beautifully created masterpiece of dessert epicness? Because I am trying this thing called eating healthy. Sounds uncomfortable, I know.

I was hesitant at first, but as soon as I took that first bite, the sweet dark chocolate balanced the tart fruit. The smooth yogurt blended with the crunchy granola just like the saying of opposites attract came to life. And then there was the banana.

While I’m not normally a fan of the fruit I used to pretend was a phone when I was a kid, the slices mixed in with everything else was on a level all to itself.

I mean, my goodness, I didn’t think a fake banana split that’s been healthified could taste as good as it did.

The best part of all, however, was seeing my 5-year-old wanting his own bowl.

Knowing there was a dish that could be used as breakfast, snack, or dessert that gets the most important person in my life some nutrients and healthy stuff makes it all the better.

Some might think there are too many ingredients, but all the different taste and texture combinations make it a well-blended bowl of scrumptious deliciousness.

Now I owe a thank you to bodybuilding.com for the recipe that enlightened my morning, fueled my Monday schlump, and kept my son from wanting the sugar-filled cereal or processed, unhealthy foods.