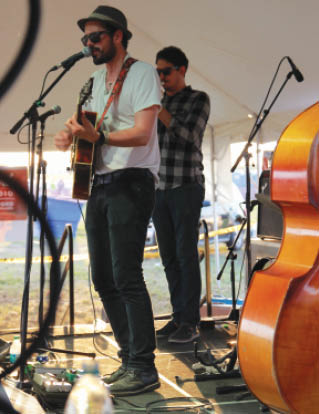 For a brand new festival,  G Fest’s debut, set at an old air field, just two miles from downtown Muskogee,  was an impressive one.

I was prepared to be surrounded by hot music and good friends for the weekend, but not for heat-stroke-inducing temperatures.

I arrived at the festival Friday afternoon to temperate conditions, but as the sun rose directly overhead, everyone fled into the big white festival tents covering the four different music stages for shade. Over sixty musicians from around the state and surrounding areas were invited to play the shaded stages.

It was hard to think straight in the 105 degree heat. So, within two hours, my friends and I had to leave to find air conditioning at a nearby hotel to pull ourselves together.

Thankfully, the sun dipped back down behind some clouds for an extended amount of time, cooling the festival grounds and all those who dared to spend the weekend in such conditions.

We returned at 6 p.m, ready to take on the festival once again.

By sunset, the heat slowly diminished, and as wind carried the music, spirits rose.

Around 7 p.m. I made my way over to the Currentland Stage to hear Kyle Reid and the Low Swinging Chariots. The Chariots shook things up by playing jazz at the heavily country-centered festival.

Anyone who has seen Kyle Reid play would agree that it is hard to refrain from tapping your feet and bobbing your head when hearing his 1920s reminiscent swing.

As Reid wrapped up his set, hundreds of people began to pool around the main stage, eagerly awaiting the night’s headliner, the Avett Brothers. I made my way over just as they began their first song.

The crowd was full of energy and excitement. It was my first time seeing the Avett Brothers live, and certainly will not be my last.

The audience danced and sang along loudly for the entirety of the three-hour concert. The Avett Brothers, clothes drenched with sweat,  joined the crowd in the hopping up and down as they played their fastest songs.

By the end of the night, I was nothing short of exhausted and in need of a shower. I felt comfort in knowing that everyone else at the festival was in the same condition.

The fun of it all did not stop when the music did, though.

Campground jams and picking circles lasted well into the night. It was 5 a.m. when I heard the last strum of a banjo at a nearby campsite.

Most of the campers were falling asleep as the sun began to rise on the very last day of the festival.

The thrill of the music and the camaraderie of camping with hundreds of other music lovers was enough to overshadow the brutal heat of the weekend. Before I finally fell asleep at 8 a.m. Saturday, I decided that I was most definitely coming back for next year’s event.

G Fest’s 2017 plans are in the works. With such a promising first year, I expect bigger acts and even bigger crowds to come.

It is safe to say that G Fest’s successful turnout would make anyone proud to be an “Okie From Muskogee”.