From extreme poverty to OCCC president 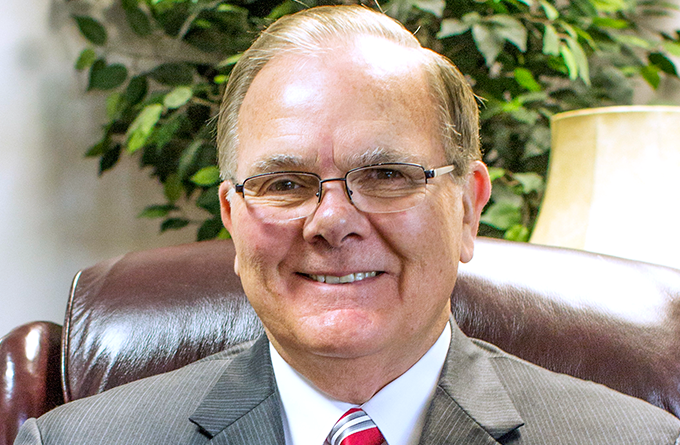 The pristine cleanliness of the OCCC president’s office looks like a janitor’s dream of no dust bunnies and cobweb-free corners.

For one former janitor, that office also represents an opportunity to help make others’ dreams become a reality — much as his has.

OCCC President Jerry Steward said he met and conquered the hurdles of poverty to become who he is today.

“I was born to and raised in brutal poverty,” he said. “My dad was a really low-paid, blue collar worker [with] eight children in the family. We were very poor. We struggled just to survive.”

He said what he persevered through not only helped shape who he is, but also it gave him the motivation to help other students.

“Most of our students here were not born wealthy,” he said. “Some were, but not most. They weren’t born with a silver spoon in their mouths. They’re not trust-fund babies.

“They’re people who are working and they’re single parents, and they have jobs and families and responsibilities just like I did.”

Steward said he can identify with students in ways that others who have not lived through hard times cannot.

“I know how it feels to go to class and, unlike a lot of other students, you can’t sit around and have a cup of coffee in the union … . You have to go to work.

“I know how that feels because that’s what I did. I know how it feels to leave class and go home and have the responsibilities of having a small baby because I did that.”

On his way up the ladder, Steward served the state of Oklahoma as a politician from 1976 to 1980. He said his time in the House of Representatives and Oklahoma Legislature helped prepare him for the role of college president.

“We have to do everything we can to provide the funding that’s necessary for students to go to school. We also have to provide funding for the buildings, grounds, professors, books and other things that make a college a college. An increasing part of a president’s role is raising money.”

Steward said he is actively working to raise private money and procure federal grants due to the dwindling funds from the state legislature over the years.

“Some people might not see the connection between that and student success, but we must have the money to keep our labs open and to keep professors in the classroom and to provide the classrooms for students to succeed,” he said.

Steward said the road to success can be achieved through hard work, perseverance, keeping your eye on the prize, and not letting anything get in the way.

“I believe that a large measure of my success is because I have always believed I will outwork everybody around me,” he said. “And that’s not a quick, easy, simple road to success and that’s not what you hear when you go to the seminars about success, but that’s what I believe. That’s what I’ve done.

He offered some advice to students.

Steward said although he had never actually considered being OCCC president, the positions he’s held at his private law practice, in the legislature, teaching and in academic roles have prepared him. He said he will use the opportunity for good.

“Now I have a much greater opportunity to impact what we do and how we do it for students,” he said. “I’m thankful every day that I have that opportunity. If I am able to impact just one student, it gives me a satisfaction that nothing else really does.”

Steward said he won’t stop at helping students get a certificate or degree. He said he also plans to help them succeed in life beyond college.

“The best thing I can do to help our students is do everything I can so that they don’t just enroll, but help them graduate and more than that,” he said. “The certificate or degree either transfers them to a four-year institution with success there or sends them out to the work force with a good paying job and good benefits. That’s what transforms them. We need to remove every obstacle we can for that student’s success.”

Steward said he hopes all students find their inner drive to succeed, no matter what obstacles may be placed in their way.

“Understand the trials and difficulties you have now are temporary, but your education is permanent and nobody can take it from you. I would encourage [students] to focus on the temporary nature of the sacrifice, the permanent nature of reward.

“When I was a janitor there was not one day of it I liked, but I understood even at that young age that it was just temporary,” he said. “It was just for a few years, but when I get my degree I’m not going to [do that] anymore.”