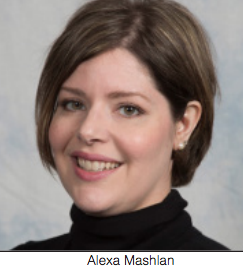 An OCCC employee many say is incredibly helpful, kind and a true champion of students was awarded the Staff Recognition Award this month by the Faculty Association.

Alexa Mashlan, assistant director of Admissions Development and Outreach, was given the award because of her going above and beyond in her service, the Faculty Association said March 23 in their regular meeting.

During the meeting faculty members said Mashlan wears so many hats at OCCC and never complains. And, her dedication to the college is admirable.

Mashlan said she was emotional when accepting the award. “I was so moved and honored by this award.  I couldn’t believe it—I cried! I appreciate it so much and I had no idea that I was even nominated,” she said.

She said she was surprised by the honor which was delivered to her via Zoom during what was supposed to be a virtual visit with George Risinger, Faculty Association president and professor of Biology.

Mashlan said when she logged into the meeting she saw not just one member of the association, but three additional Faculty Association members who presented her the commendation and read her a letter written by Sarah Baker, professor of Speech, Language, and Pathologist Assistant and program director

“I was speechless, which is not something that I can usually say about myself,” she joked