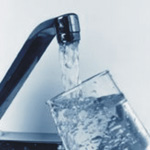 One of Leonardo da Vinci’s ancient designs has helped the Water4 Foundation bring clean drinking water to more than 200,000 people in numerous developing countries in Africa, Asia and South America.

Chris Cotner, executive director of the non-governmental organization, visited the OCCC campus in late March to explain how Da Vinci’s design has helped so many.

“We needed to come up with a design for a water pump that was both inexpensive to produce and easy to maintain,” Cotner said. The Water4 Foundation enlisted the help of Steve Stewart to create a pump.

Stewart, an Oklahoma native who received a bachelor’s degree in industrial psychology from Oklahoma State University, based his design on a Da Vinci sketch that was in a book he purchased while on vacation in Rome 10 years ago.

The original design called for materials such as sheep stomachs and animal skin. The Water4 Foundation modified it to use PVC piping, a material that is readily available in just about every country.

“I had never worked with water pumps ever,” Stewart said in a phone interview. “It took 2 ½ months, 18 hours a day, seven days a week learning about hydrodynamics and PVC to finish the project.”

The original Da Vinci design did not take into account atmospheric pressure making it impossible to drill beyond 30 feet. A few modifications and nine prototypes later, Water4 was ready to send the pumps into the field.

“Call it miraculous or coincidental, but we have not been able to find this Da Vinci design in any other book,” Cotner said.

With these pumps the Water4 Foundation is able to bring intermediate water drilling technology to countries where people are still using shovels and pickaxes to dig for water. The pumps are coupled with drilling materials and shipped to countries in kits.

Each drill kit costs about $5,000 and can drill up to 50 wells in a community. It requires manpower but no electricity or other power supply. Each drill kit can supply water for 10,000 to 30,000 people. The kits can easily fit in the back of an SUV or, in some cases, are carried on the back of motorcycles, Cotner said.

Oftentimes sufficient drinking water can be found as little as 30 feet beneath the Earth’s surface. Before these communities were provided with the technology to drill their own wells, people would have to walk miles every day just to obtain clean drinking water.

“The average walk to get water, round-trip, is about 3.5 miles,” Cotner said. “On the way back you have to carry five gallons of water, which weighs approximately 50 pounds.”

This painstaking chore is performed upwards of three times a day, on a daily basis, by woman and girls.

The wells are fairly easy to operate and to maintain, Cotner said. However, if a problem does persist, the Water4 Foundation is able to communicate with the nationals via Skype to offer solutions.

The foundation provides well-drilling technology but works with local people to drill the wells.

For many of these nationals, water drilling has become a way to generate income. Many have started their own drilling businesses that are thriving. On average natives make about $150 per well, a good income in many developing countries.

The Water4 Foundation not only provides people with clean drinking water but also with a sense of pride and community.

“We are dedicated to providing widely accessible, inexpensive, and sustainable water solutions and to create a catalyst for alleviating poverty and combating the global water crisis,” Cotner said.

Cotner practiced law as an attorney for seven years before joining the Water4 Foundation in 2008, he said.

When he was approached by the founders of Water4 Foundation, Dick and Terri Greenly, and asked if he was tired of being a lawyer, Cotner responded, “I was tired the day they swore me in.” Thus began his career as a waterman.

For more information on the Water4 Foundation, visit their website at www.water4.org.