The Female Experience: Understanding the Life of a Woman Who Works as a “Sugar Baby” 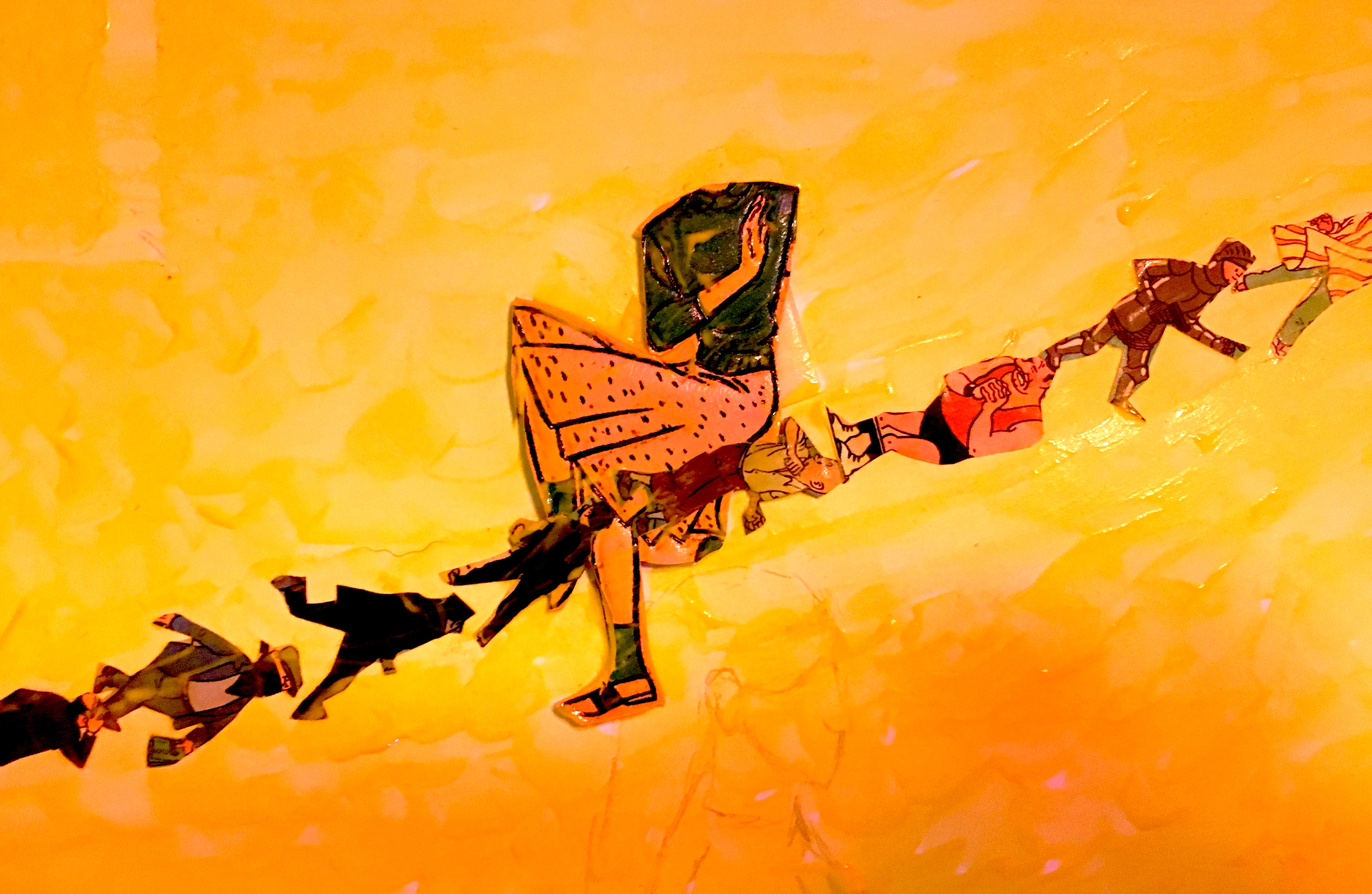 Rain broke on sidewalk. The heat escaping concrete, cast the gentle smell one associates with summer showers, inoffensive, indescribable, and timeless. Sitting inside Elemental Cafe, I watched rain and people pour and flow through the doors from under the awning, steel sheets to keep heads dry and food unsullied.

“Cool, I’m here too wearing a green and purple striped shirt,” I replied.

Rising, the metal framed chair screeched against the concrete floor, reminding me auto-repair was this building’s conceptual intended purpose.

I went into the rain.

What follows is my conversation with the sender of the text. Her name, is secret. Her profession, illegal.

She was standing, at the edge of the awning, droplets ricocheting onto her black combat boots, gazing. The rain caught her eye.

Q. How did you first get involved with being a sugar baby?

A. “Well, I, uh, started my own massage business with one of my friends a couple years ago, and just through that I found clients who wanted to spend more time with me. My time is valuable, obviously, and  that’s basically how it evolved to where I am today.”

Q. So, have you ever used any of the websites they have available for sugar babies?

A. “Yeah, so the way that’s how I found my clients originally, is through Backpage. Through my ads for my massage business, which closed down in March, unfortunately. But, I didn’t totally rely on that. Once I established clients there I was like, oh my god, I could use an actual [sugar baby] website! I’ve used Seeking Arrangements, a couple other ones, but I haven’t like the other ones, so I usually stick with that one. It’s not as successful as actually just coming across clients in person, but I’ve managed to come across like two or three of them. I met one of them about a month ago on there and that’s who I’m meeting today at three for lunch (she laughs).”

Q. What do you like, what do you dislike about using Seeking Arrangements?

A. “It’s not necessarily a dislike, it’s annoying that I don’t necessarily know exactly who I’m talking to on there. I think caution in general, when it comes to meeting people online, is probably the biggest one. Being unsure if someone is serious or not. Because if I meet him in real life I already know that they have money and they already know that I’m a real person.”

Q. So you get a sense of their personality?

A. “Yeah, I really hate texting in general and I don’t want notifications from those websites popping up on my phone, so I use Safari and won’t know when someone messages me back [until] I get back on there, so the feeling of a conversation is just gone.”

Q. I think that’s a big issue with sites like tinder, is it a similar vibe?

“Exactly, but on [Seeking Arrangements] there’s already a notion of there’s going to be an exchange. That’s the compensation for spending time with someone. There’s more pressure there to be like, ‘oh I have to be as likeable as I can.’ Cause on Tinder, I don’t give a f**k. When it comes to money, I’m like s**t. (She laughs). Got to secure the bag!”

Q. Have you ever felt pressure to do anything you’re uncomfortable with?

A. “I’m pretty straightforward when it comes to what I want to do in all aspects of life. I do what I want. I’ve always had that type of attitude. Working with my business, has helped me gain the boldness of saying no when I don’t want to do something. It’s honestly a power trip. It’s, I wouldn’t say a hobby, but, it’s a strange feeling. But no, I’ve never felt pressure to do anything I don’t want to do. I’m very clear about that. I feel like you can get a vibe from someone pretty early on about what their personality is going to be like. If I get a passive aggressiveness which someone the other day on there, that I’ve blocked on Instagram, somehow, I think it was through one of my homegirls who also is a sugar baby, I blocked him on there, and he actually found me on seeking arrangements, blocked him on there, he made a new account, and the first thing he said was ‘come over,’ and I said a couple days later ‘I’m not keen on meeting strangers on the internet, especially when we don’t discuss compensation before,’ and he said,’K? Bye?’ and I was like, ‘Okayyyy?’ He was like, ‘you’re trying to get me to send money without even meeting you’ and I said, ‘that’s not what I said at all, and I can tell by your demeanor you’re not someone I want to be around.’ I blocked him after that. I feel like I have a good sense of judgement when it comes to meeting people in general.”

Q. Is that the most valuable skill in this industry?

“Yeah, definitely. I have girls all the time who say they want to do something similar and the biggest thing I try to tell them is that it’s not for everyone. You have to have a really strong willpower and be able to say no in situations where you feel uncomfortable. Because you’re the boss, they’re there for you. It’s your time, you’re the most valuable asset.”

A. Have you ever felt an emotional connection with someone you’ve met through this process?

“I definitely develop friendships. I put a lot of trust in people when it comes to this, and I do like a lot of them as friends. But, I have to draw a clear line between, this is money, it’s not an actual relationship. But if I ever got in trouble I know that they would actually feel that way and have a care about me, and that’s the most important thing is to make sure there’s mutual respect there.”

Q. That’s super sweet. Are you in a relationship aside from your business?

A. “Yes, I have been in a long term relationship for five years. I tend to not disclose much about what I do because I feel like you shouldn’t ask questions you don’t want the answer to, you know? There has to be a big mutual respect and trust there because it’s… It’s just important to me. If anybody was trying to pry into my business, regardless of who you are, if you’re my family or what, like, I don’t owe you anything. I think it’s important my boyfriend knows that, and he’s always been supportive of that.”

A. “I moved down here when I was seventeen, and he and I started dating and I have essentially been independant all of my adult life and he’s known that, he respects that as well. So I think that’s why our relationship works so well. It really takes a mature person. Good communication for sure, to a certain extent, I’m never going to be rude, like ‘none of your f**king business’ unless I feel like an accusation vibe toward myself. I really value our relationship.”

Q. Change of subject: Do you get paid per meeting, or is it a monthly thing?

A. “If I’m first meeting someone I will always make sure, ‘cause I need to see the money. Like you need to send me a picture of it, and as soon as we meet, regardless of what happens, you’re paying me for my time. Not for whatever the h**l you expect, it’s about me, and even with my business, it’s cash first because you never know. You have to trust someone.”

Q. So, you told me about an unpleasant experience with a man online, have you had an in person encounter which left something to be desired?

A. “Not sugar baby-ing, but at my old job I did. I’ve had to kick people out. I would hire a new girl, she wouldn’t get the money first, and at the end of the appointment they would refuse to pay her, and they would threaten to call the cops on me. And like, you came here. And now you want to call the cops? I’ve had to freak out on people like that before. Never with sugar baby-ing at all, just because I’m not gonna meet someone that I get a bad vibe from.”

Q. Does your family know what you do?

Q. Do you ever plan on telling them?

A. “I feel like it’s none of their f**king business. As long as I’m happy and I’m healthy.”

Q. How do you feel this profession affects your self esteem?

A. “It’s made me have definitely higher self esteem for sure, because if somebody wants to spend time with you, they think you’re beautiful, they think you’re [worthy], like I know my own worth, but they agree and they’ll go above and beyond to prove they want to be around me and support me, help me. Most people, who are older gentlemen, are successful, say they want to mentor me to help me achieve my own goals, and that’s a really nice feeling. Yeah, it’s almost like a father figure almost. It’s like having multiple in your life that care about you.”