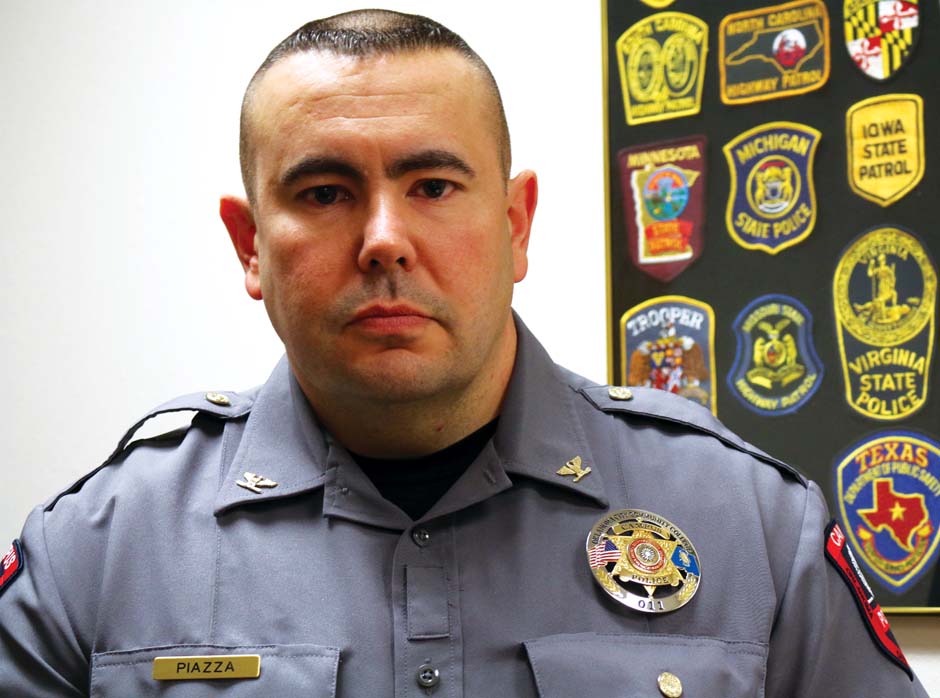 This brochure highlights a vision that former Chief James Fitzpatrick had for the OCCC Police Department when he started it in 2010 – to be fully accredited.

“This is our first step,” said Piazza. He is working to get the department accredited—first by the state and then nationally.

“We’re gonna better serve the students, faculty, and staff with us being a certified agency,” Piazza said.

OCCC’s second chief came to the college to apply as a police officer in 2013.

He said he walked into the Main Building by the welcoming center and stopped to observe.

“The common area students were seated— they’re talking, they’re laughing. Everybody just seemed so happy,” Piazza said. “It was just such a positive atmosphere. And I thought it would be nice to be a part of something like that.”

And he is. He got hired, and over the years he worked his way up the ranks to acting sergeant, lieutenant, and is now finally chief.

Daniel Piazza is now a familiar face around OCCC.

President Jerry Steward said that within a few months of him coming to the college, Piazza became one of the most liked and respected officers there.

“One of the things I really like about him is he is student centered. Yeah, we’re going to enforce the law and we’re going to keep order, but at the same time, he understands that really the police department, just like the rest of us, are here to serve the students and to protect them,” said Steward.

Piazza started this path at a young age.

From kindergarten to the year he graduated middle school, he was awarded the citizenship award from his teachers at Lincoln Schools

“I always tried to help people. From holding doors to carrying books to doing anything I could for the students and the faculty,” Piazza said.

He remembers the day McGruff the Crime Dog came with a Drug Abuse Resistance Education Police Officer to his school. Piazza was immediately drawn to them.

“The way they looked in uniform, the way they carried themselves and just how kind, they were extremely kind. I admired that,” he said.

“I think I was lucky where I grew up.”

He said the police where he grew up in rural Arkansas by Fayetteville were role models to him.

“They just seemed like they were always there to help. Very approachable. I always had great experiences with law enforcement. Some people don’t, some people do, but mine has always been great.

“I tried to model myself off of them. They carried themselves with confidence. I didn’t see like an ego or anything like that.

“From a young age I knew I wanted to go in law enforcement,” Piazza said.

Upon graduating high school Piazza enlisted in the U.S. Air Force, where he served as a security policemen.

After the Air Force, Piazza went into law enforcement.

He worked at the Cleveland County Sheriff’s Office for 12 years. He was the major over the operations division, which handled anything that was law enforcement related for Cleveland County.

When he left the county, he planned on taking a year off to do some traveling.

“It didn’t take long and I was bored,” Piazza said.

He is not bored anymore.

For the time being, Piazza is pulling double duty.

Though the hiring process is underway, a new lieutenant has not been brought in as of Feb. 15.

“It’s a big step going from where I was at as lieutenant to the chief.”

One month in, he said he is getting used to the administrative side of the chief position.

Piazza said that he and the former chief speak to their police officers about being engaged with the community on campus.

“Everybody talks about community policing, but there is a difference between talking and actually doing it.”

Piazza said that community policing means being involved, knowing, and talking regularly to those on campus.

“You can have a presence all day long. As a police officer sitting in a vehicle or sitting in one location— that’s all you ever see him do. That presence means nothing. Presence is all about how you interact with the community that you are serving— and until someone tells me different I feel that we interact positively on a daily basis with the students, faculty and staff.”

He said that few of their calls on campus result in an arrest or enforcement action.

Mostly, they send students to use campus resources such as Student Life and Student Support Services to help them.

“A lot of times, something’s going on in their life to where they need a little bit of help,” Piazza said “Law enforcement is not about being punitive.”

Piazza said that it is not always easy to be a police officer. He said police officers face severe criticism from their subordinates, peers, supervisors and the media.

“I can tell you that sometimes the long hours, the working the night shift, working holidays—when you do this year after year after year, it does wear on you. But it takes one positive interaction or one time when you know you actually helped somebody and everything goes away— all the negative just seems to be washed away,” he said.

Piazza can still vividly remember a time in his early career where he was reminded why he originally chose to be an officer.

He had responded to a burglary at an elderly woman’s home. He said she was on a fixed budget and they hadn’t taken a lot from her house, but they did take her change jar.

She was so upset by this that he worried there had been jewelry or something more valuable hidden in the jar.

“Was there something special about the change jar?” Piazza remembers asking her.

The woman pulled out a clipping of an advertisement for a porch bench. She had been saving her spare change so that she could sit on her porch outside.

Piazza said he and a few officers went and bought her a bench and brought it back.

“It’s small. Obviously, she had a place to live, she had clothes on her back, she had food in her stomach so it’s not a huge deal, but you can see how appreciative she was when we showed up with an $85 bench. Little things like that, they do stay with you,” he said.