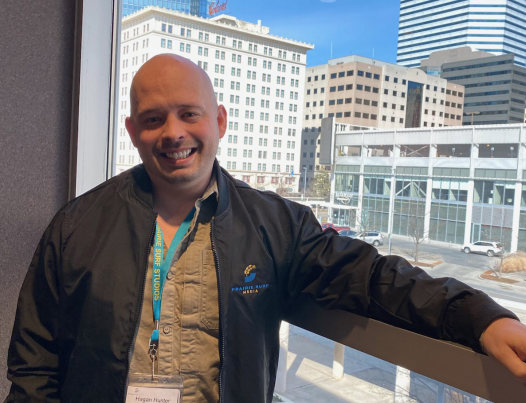 Students come to OCCC with many different experiences and goals for success.

Hagan Hunter is one such student who came to the college with the dream of making films. He is a student at OCCC who is majoring in the Digital Cinema Production program.

Before joining the program he served in the United States Marine Corps and worked in Oil & Gas as an engineer in Dubai and Saudi Arabia. It was his experiences in both professions which prepared him for a career in the film industry, he said.

“So many of our nation’s veterans have skills and traits that make them extremely well suited to become not just members of the film industry, but highly desired ones at that,” Hunter said.

Hunter reviewed online film production courses in the Oklahoma area and found OCCC’s program stood out as the top choice.

Hunter said he had worked on some Lifetime films and a Discovery Channel series previously. But, it was his intention to attend OCCC and begin to work in the film industry.

“While I attended OCCC I had the opportunities to work both on films and TV series productions,” he said

Hunter said his previous experience in the film industry and the knowledge he gained at OCCC paid off quickly. And because of both, he recently started work at Prairie Surf Media, a locally-based production company in Oklahoma City.

“Prairie Surf Media has taken over what was once the Cox Convention Center and is in the process of converting it into Prairie Surf Studios, the largest film production studio in the Midwest,” Hunter said.

He said he learned about the opportunity to work at Prairie Surf Media through one of his instructors, Digital Cinema Production Instructor Sean Lynch, who has a multitude of film industry connections from his work in the industry.

Like many students, Hunter has taken pause in his education because of the requirement that he do online learning, but he’s busy at Prairie Surf Media.

Hunter said he is working on a project that is producing the “Kurt Warner: An American Underdog Story” film.

“The film is going well and although Kurt Warner has not come through our facility yet, both Zachary Levi (“Shazam!”) and Anna Paquin (“True Blood”, “X-Men”) have used our facility for film production,” he said.

Hunter said everyone at Prairie Surf Media is committed to growing the Oklahoma Film Industry and helping to diversify the state’s economy.

He said there are constantly opportunities to work on film and television productions in the Oklahoma area, and Prairie Surf Media plans to increase those opportunities.

“The work-culture and goal of Prairie Surf Media have become a passion of mine that allows me to love coming in everyday, this is my career now,” he said.

While there are no other OCCC students working with him at Prairie Surf Media, the production company is currently searching for summer and fall interns that want to help grow the Oklahoma Film Industry, he said.