J Fusion Here For More Than The Glory 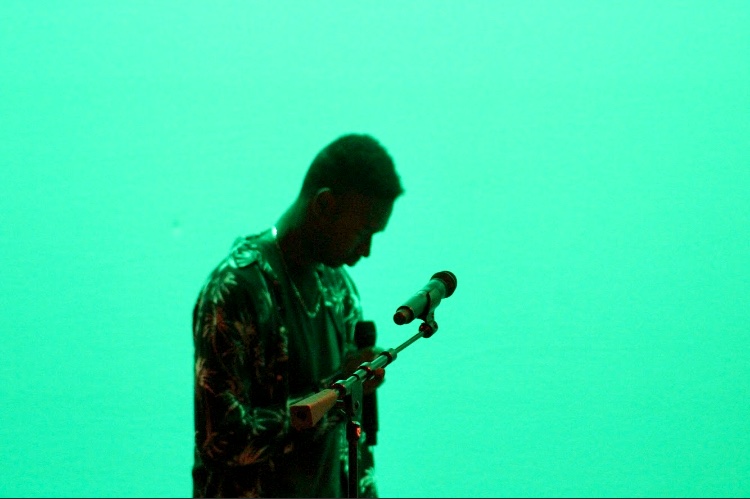 May 2, Oklahoma City Community College (OCCC) students Jamal Williams, with the help of videographer Andrew Johnson, produced for the first time live and in concert, J Fusion. The concert was held in the Bruce Owen Theater as singer Jamal Williams took to the stage for his live debut.

“Kinda came up with it [the name J Fusion] at high school freestyling. I was just rhyming trying to come up with something that rhymes with illusion and I was like ‘just call me J fusion’ and they liked it and I was like ‘okay I’m J Fusion now’,” Williams said.

Williams and Johnson have been working on producing the show for about three months.

“I’ve never had the whole show to myself,” Williams said. “This production means to me that I finally get to show a lot of people the work I put in.”

Williams said the hardest part was trying to decide what songs he wanted to preform.

“I’ve got a lot of songs. We narrowed down the songs to 10 that I wanted to perform with, then I had to go to the studio and mix it for those specific speakers in there [the Bruce Owens Theater],” Williams said. “These are my favorite songs off of each album that I made. I have three albums that are out and two that I’m working on now, so a lot are my new songs.”

All J Fusion songs are original and the theme throughout the ones Williams chose were littered with hope.

“I hope they [the audience] get a message that in humanity we can all have unity ‘cause that’s what my songs are mainly about,” Williams said. ”Trying to do positive stuff, we don’t have to fight each other, we don’t have to kill each other. That’s what I want them to leave with, just uplifted, good heart, good energy.”

I just want to relax and pop my daily beer

Clear to my ear what do I hear Oh somebody Fussing

Sucking up every discussion about you so they can rub it

And all the things you do because they secretly love you.”

As the song continues, it’s clear Williams is singing about a personal experience.

They try to break your so it can make them fill whole.”

Williams hopes people can relate to his music and all the effort he put into producing it.

“I want to show people how much effort I put into the music I make just to try to uplift people’s hearts. I know it’s sluggish through days ‘cause when I started music I just wanted to give that feeling back cause artists did that for me. I’m just trying to do the same thing for other people, hope they get a good filling from it,” Williams said.

The idea of featuring J Fusion live at OCCC evolved as Johnson was first producing a documentary for Williams. With the mentality of ‘go big or go home,’ the duo successfully pulled off a thrilling student production.

“We’re shooting 10 cameras tonight which is an excessive amount. Just finding people that I can reliably trust to do that with having a game plan for how we’re shooting it, how we’re editing it and all that. Making sure every basis is covered,” Johnson said just how much effort went into making this show possible.

J Fusion was nothing short of electrifying, and the fans thought so as well.

“I feel like the performance went better than I expected. All the rehearsals went good but doing that in front of a live audience was amazing! The feedback was great!

The only thing I would do differently for the show is kept a bigger size towel by me to wipe off the sweat,” Williams said.

The duo have only known each other for eight months, but they plan on taking J Fusion even further, starting with a Summer show in Austin Texas.