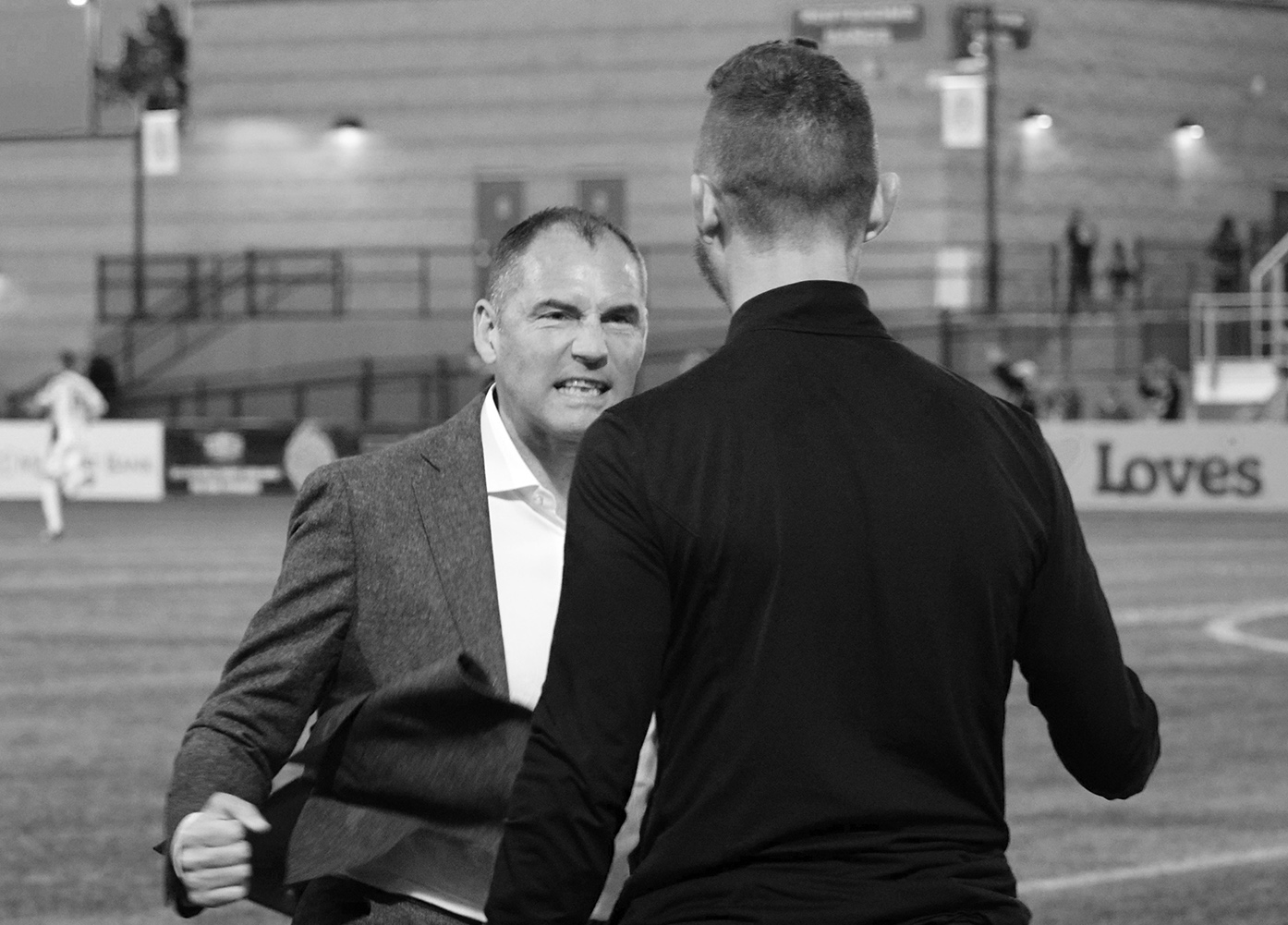 Energy FC and the Tulsa Roughnecks drew 1-1 before a smattering of fans in 2019’s first edition of the Black Gold Derby.

Oklahoma City overcame a slow start, but finished the game firing on all cylinders, unfortunate to not leave ONEOK Field with all three points.

“Any time you get a point on the road, especially in a derby game when its hard fought and intense like it was, and especially coming down from a goal down early, you’ve got to be proud of the effort and commitment the players have made,” said head coach Steve Cooke after the match. “It was one of those games where you leave and you say you’re happy with a point, but we feel we could have got more.”

Football can be a cruel mistress, as the Energy learned in the opening moments of the game.

In the third minute, the ball fell to the feet of Energy forward Omar Gordon in the penalty area off of a deflection. Gordon made strong contact, but his volley ricocheted off the crossbar.

Moments later at the other end of the pitch, Energy defender Mike da Fonte carelessly turned the ball over to Tulsa’s Rodrigo Da Costa. Da Costa slid the ball to teammate Janu Silva, who coolly slid the ball past Cody Laurendi’s reach and into the back of the net.

Silva nearly doubled Tulsa’s lead a few minutes later, as he again found himself through on goal behind the Energy defense, but this time he was unable to beat Laurendi.

Half an hour into the game, Oklahoma City began to regain a foothold.

Christian Eissele almost leveled the contest for the Energy when he blocked Roughnecks keeper Mason Stajduhar’s clearance. Eissele found the ball at his feet with an open net in front of him, but he did not put enough pace on the shot and Tulsa defender Moses Makinde cleared the lines with a last ditch slide.

Three minutes later, Oklahoma City found their equalizer. Alexy Bosetti lined up a free kick on the left edge of the penalty area, but he fired the ball into the Tulsa wall. Though his shot was blocked, it deflected into the box, where Gordon redirected the ball into the back of the net with a well-placed header.

“Fantastic header to get in front of the mark and to redirect it into the corner of the goal,” Cooke said. “I thought it was a terrific header.”

Gordon celebrated the goal by running into the gathering of Energy fans, who made the trip up the turnpike for the match and were stationed behind the goal.

“He ran over to the corner and over to the fans… Our fans were unbelievable again tonight. Having a look around the stadium, there was more green tonight than anything else,” said Cooke.

Though there may not have been more Energy fans present than Roughnecks fans, Oklahoma City was still well represented in the crowd.

Oklahoma City played most of the second half on the front foot, outshooting Tulsa nine to five in the second half. Unfortunately, despite generating more offense, the Energy were unable to break the gridlock and win the game.

“We started in the first 15 to 20 minutes a little bit slow and a bit lacking in intensity, and then in the second half one of the things we addressed is make sure we come out with that. I think in the second half we controlled possession, and we controlled where the game was played as well… We felt we did well enough to win the game, but that’s the way it goes sometimes,” said Cooke.

Oklahoma City should have doubled their lead in the 53rd minute. Bosetti picked out Gordon on a beautiful through ball towards the right corner flag. Gordon then centered the ball to teammate Cordell Cato, but his shot was parried wide by the sliding Stajduhar to complete the save.

Forward Deshorn Brown returned to action for the first time after missing four weeks with a knee injury. He replaced Bosetti in the 73rd minute.

Brown provided the last real chance for Oklahoma City moments after his introduction. He beat the Tulsa defense, and curled a shot around Stajduhar, but ultimately he pushed the shot just wide of Stajduhar’s near post.

Despite having to settle for a draw, the Energy will be able to distinguish some positives from their performance.

The most notable will be the performance of the team, specifically the midfield, in the second half. Midfielders Callum Ross and Rafael Garcia are often left to fend for themselves when Oklahoma City’s front four starts to fire on all cylinders. Even though they did not score, the Energy showed great balance, attacking freely while not stretching themselves too thin to stay sound defensively. Ross and Garcia will look to build on their great second half performances in the Energy’s next outing.

Cooke was pleased with how his midfield preformed.

“When we go forward, we go forward in numbers, we attack with pace, we attack with real positivity going towards the goal, and at times that might mean one or two get excited. Maintaining that shape behind the ball, making sure we don’t get counterattacked against, I think for the most part they did that well tonight, but it does leave us open. But I’m not someone who says ‘hey, go faster but put the brakes on.’ If we’re gonna go for it, we’re gonna go for it,” said Cooke.

Oklahoma City returns to the friendly confines of Taft Stadium next Saturday, where they will host league cellar dwellers Tacoma Defiance, who have registered just six points in nine matches.