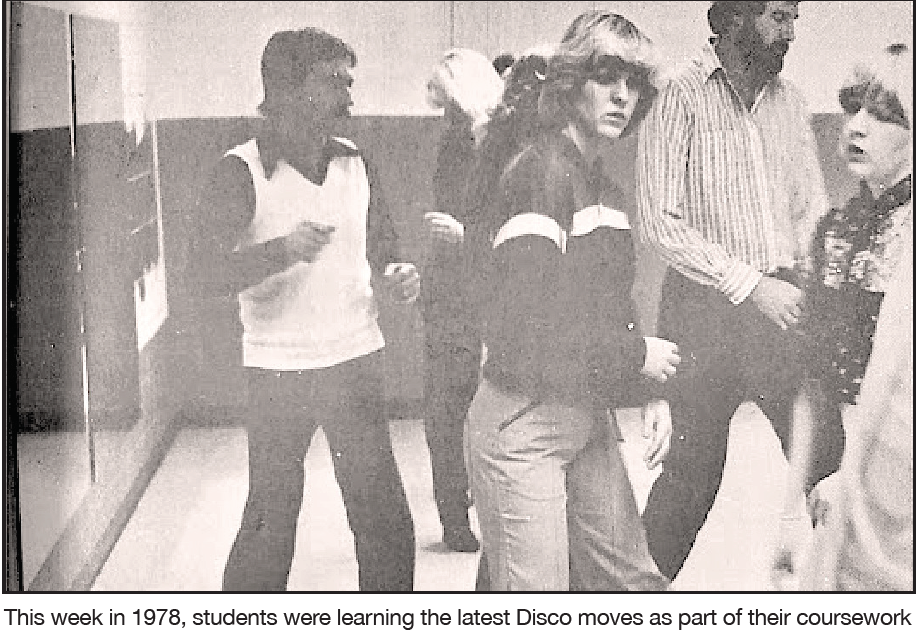 The college has seen a lot of changes in its almost 50 years of history, and  you might have been part of them. Here’s what happened this week in history

Students in the South Oklahoma City Junior College (which is now named OCCC), practiced the latest moves in disco classes taught at the college.

Also this week, students and employees were warned that the phone system, which had 12 lines, was dangerous to their mental health. Vice President of Administrative Services Al Taylor said the system would overload, especially in bad weather.

However, he had a fix. “The good Ma Bell fairy” was going to sprinkle the phone lines with “Dimension 400 dust.”

What that meant was the college would get 10 additional phone lines that, remarkably, didn’t have to go through a switchboard operator to transfer a call from one line to another.

And in clubs news, students banded together to launch a Minority Students Association. Ron Summers, professor of Accounting and Mary Ann Moore, professor of Fine Arts and Crafts, served as co-sponsors.

“Being in college is a cultural shock for many minority students, “ Summers said.

Summers said one of his goals for the club was to offer college information to students in an easy-to-access format.

The college hosted a “Black Experience” all-student and faculty photo contest as part of Brotherhood month. Cash awards were $10, $15 and $25.

Also this week, Students at OKCCC (the college had changed its name to Oklahoma City Community College and used the abbreviation) performed in “A Streetcar Named Desire.” Performances for all nights were free to all students with I.D.

Backgammon enthusiasts were encouraged to sign up for the college’s Backgammon tournament.

In other news, college community members were offering child-care services for $3.35 an hour.

OKCCC (the abbreviation the college used at the time) faculty and employees were told “Surf’s Up” as email and internet access was made available on their computers.

John Richardson, director of Computer Services Development, said he was excited about the advanced technology.

“As far as we know, OKCCC is the first two-year college in the state of Oklahoma to have a web server on campus,” he said.

Denny Myers, economics professor, was the first faculty member to use the internet in his office on campus. He said he believed having internet connection at the college would change the way professors taught their classes in the future.

Also this week, campus security was called and rushed to the Arts and Humanities Building to break up a fight.

English Professor Gene Bragdon called the squad but the officers found the fight was, in deed, three students practicing mock arguments as part of their speech class assignment.

“I had no idea it was a set-up” Bragdon said as the officers left and Speech Professor Pat Daugherty resumed his lesson about distractions in effective listening.

As a way to help students who couldn’t afford textbooks, OCCC initiated an Emergency Textbook Loan Program, in which students could borrow textbooks for many of their classes for up to 60 days.

The OCCC Foundation gave money for the college to purchase textbooks for major subjects, and over 100 students took part in the program during the semester.

Almost all textbooks were returned and were loaned out to other students who needed them, according to program director Markus Schneberger, Learning Skills professor.

Also this week, student teachers in the Child Development Center and Lab School taught their preschool students about rocks. Students in Preschool Class A had their students put rocks into a tumbler and observe changes that occurred during the process.

Away from the toddlers, the Advocates of Peace club, sponsored by English Professor Stephen Morrow, was offering free hugs to all on campus in hopes of promoting peace and unity.

OCCC offered free tax service and help to the campus and surrounding community in the Main Building. This was the 17th year the college hosted the Volunteer Income Tax Assistance program.

Also, this week, the John Massey building was nearing completion on the southeast side of campus. It replaced the Child Development Center and Lab School which was relocated.

In a different building—the Wellness Center—Intramural 5-on-5 basketball began this week.

Eric Watson, Recreation and Sports specialist, said he was looking forward to organizing the free basketball season, which had five teams.

“I’m very excited about this upcoming intramural season,” he said.