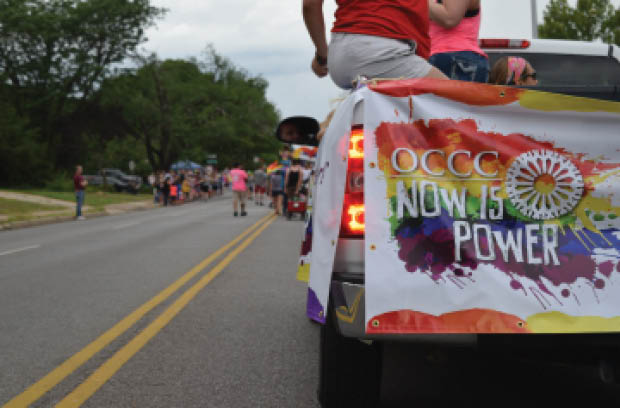 Storm clouds loomed overhead and burst into torrential rain, but the storm only added to the excitement of gay pride as Oklahoma City Community College participated for the first time in the Oklahoma City Pride parade last Sunday.

A group made up of students, faculty, staff and administrators represented the college at the event. They drove and rode on a college float, while others walked alongside it handing out candy and cheering.

Regina Switzer, pride float coordinator and Equal Opportunity director, said she was equally excited for the parade and for OCCC’s first appearance at the event.

She said “It’s a bit awkward because people are watching you, but we got over it quickly and had some fun.”

Switzer expressed her gratitude to everyone who joined the event from the college.

“It was a moving experience” Switzer said.

The OCCC float (a white college pickup) was adorned with a “Now Is Power – Together We’re Better” colorful logo.  A half-dozen college representatives sat in the bed and waved while being driven by OCCC Police Officer David Madden.

They moved along the parade route from NW 42nd and N. Classen Boulevard all the way to NW 39th Street and Pennsylvania Avenue. All the while, children screamed and ran to get candy from Art Professor Jeremy Fineman, English Professor Stephen Morrow and Randy Cassimus Alumni Relations and Community Development associate director, who were handing out Charms Blow Pops.

Spectators offered OCCC participants, including Grants and Contracts Director Joe Swalwell, bottles of water and thanked the team for participating in the parade.

As the parade got closer to it’s destination, near 39th Street and Pennsylvania Avenue, flashes of lightning shot through the sky and thunder roared over the dance music blasting from the floats. The crowd of hundreds, who were jumping and screaming near the metal gates that lined the streets, roared in response.

RaeLynn Ortiz, administrative assistant to the vice president of Human Resources, who rode in the OCCC float said she became emotional during the parade.

“When we were gearing up and we were ready to go and started moving, the crowd wasn’t as big as I thought,“ she said. “So when we turned that corner(39th Street) and everybody just started screaming and yelling for us, I literally, I kind of feel stupid for saying this, I almost started crying.

“It was an overwhelming feeling of just amazing support, amazing love, amazing, just, generosity and I had to catch my breath,” she said.

Almost everyone seemed to be catching their collective breath when the rain started falling.

Another who was  excited was broadcast journalism major Aaron Cardenas who said he has been an active ally in the LGBTQ community for years and was glad to see that OCCC was making its first appearance.

“My favorite thing, although I am dealing with a bit of a head cold now, was the torrential rain downpour,” he said.

“You would have assumed that everyone would have abandoned their posts for shelter, but everyone cheered the rain on and stood with the marchers as we pushed through,” he said.

“I wanted to stand by my LGBT peers as they have stood beside me,” Cardenas said.

The rain kept falling but did not scare away attendees including Nicholas Webb, Communications Lab director.

Although Webb and throngs of others cheered the college as they passed by, not everyone was appreciative, however.

The event was also occupied by people who oppose the LGBT community and OKC Pride movement.

Preachers and people with opposing views held signs and talked through megaphones as they shared their warnings, “God abhors homosexuality,” and “Mourn… repent for your sins.”

Alan Maricle, a preacher who said he represented the Abolitionist Society of Norman, held his sign and spoke to anyone who would listen. He also walked around with a small group attempting to spread his message.

Maricle said he believes U.S. culture is slowly losing grasp of what is normal. He warned the oversexualisation of pride is ruining people’s faith.

“The fact that I can look around at the pride parade and see numerous little children being exposed to this kind of crass and openly celebrated grossness is as sickening as it is grievous, and drives me to great sorrow.”

Cardenas said he was aware of the protesters, but chose not to acknowledge them.

“I believe everyone is entitled to their First Amendment right and as long as no one is hurting anyone, I don’t have an issue,” he said.

“I take comfort in the fact that these protesters are drowned out by the love and support and cheers of the community.”

“As long as their protest or demonstration is civil, they have every right to do that. As an institution we respect everybody’s opinion. That’s what diversity means,” she said.

“As long as it doesn’t border on disrespect, because it’s the respectfulness that we aim for. That’s civil discourse, and they’re entitled to it.

“We all have our journeys,” she said.