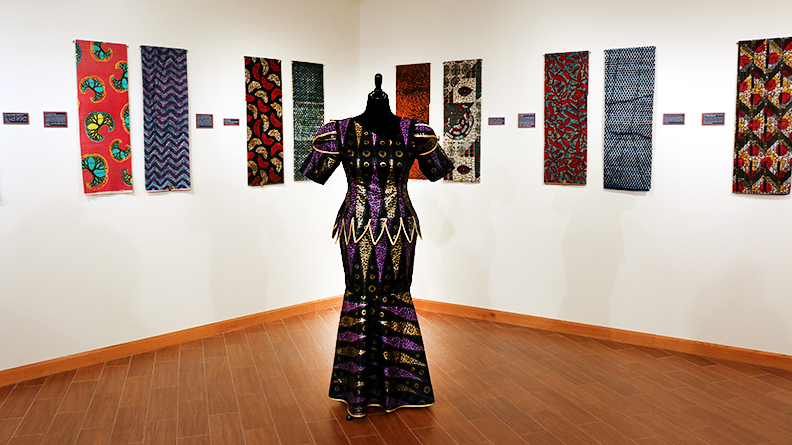 Sixty-nine examples of African wax print fabrics, or kente cloths, are now on display thanks to the generosity of Collector Gifty Benson.

Benson said the prints give observers a peek into African culture. She said the “Happy Family” print — the most popular fabric — is a great example.

“The hen, the female, is right in the center with her brood and eggs around her,” Benson said. “It shows the importance of the woman in the African family.”

She said each pattern has a name, with the colors and motifs within the design also carrying meaning.

Benson said the Dutch originally made the fabrics to sell in Indonesia, meaning to industrialize the prints the Indonesians favored. However, she said, the Indonesians were not interested in purchasing the patterns.

The Dutch then stopped in Africa and sold all the fabric they had made. At that time, the cloth patterns began to feature more African plants and birds, Benson said.

The exhibit follows the African prints along that journey.

Also on display are several dresses made from these prints, including Benson’s mother’s wedding dress, which is made from hand-woven fabric, she said.

Benson said the traditional African funeral colors are red and black, so many fabrics in the collection are designed for that occasion.

“The red is to show us the bloodshot eyes, to see the seriousness of the matter and the blood that is shed,” she said. “The black is the heart, our mourning spirit. Our hearts are heavy.”

Cultural Arts Assistant Scott Tigert said through this exhibit, students can gain insight into the cultural tradition of communicating through clothing. He said Benson emphasized the importance of these colorful patterns to her culture.

“She shared with us that this is a vital part of the African culture she’s from,” he said. “Some of the prints are still being made. They’ve been in print, so to speak, for over a hundred years.”

Tigert was fascinated that young people wear the super wax prints as a way of branding themselves.

“Isn’t that interesting that in a culture where I don’t know how extensive Internet, technology, devices are and such — you’ve got a group of people who are moving into the future and that’s how they want to move into the future.

“If you go look at those super prints, they’re sharp, real sharp edges. The colors are just a little bit harder or brighter than the others. It’s interesting how they’re identifying themselves.”

Benson said several of the print styles are named after President Barack Obama and the first lady, including “Michelle Obama’s Shoes.”

Benson said the pattern “Angelina” was very popular worldwide, especially during the ’60s.

“It’s an international cloth — one of the most iconic prints. It trended with the hippies. Every hippie wore this one.”

Benson said there are three types of fabric: the wax block, java print and super wax. The prints are cut and purchased in 6-yard segments. The super wax prints are made of finer cotton.

She said men wrap the kente cloth around themselves and drape it over their shoulder, while the women wear dresses.

Two yards are used for the skirt, two for the peplum blouse and two are used to hang as a sling.

She said only the very wealthy can afford to pay the $200 to $300 price tag for a prepared (not handmade) dress with this fabric.

“They wear them with a Rolex watch, Louis Vuitton bag and Christian Louboutin shoes,” Benson said. “This really tells you their social standing in the society.

“Every three or four times they have a new batch, everyone wants the new clothes.”

Benson said she will eventually donate the entire collection to a museum for permanent display.

The exhibit is open 1 p.m. to 5 p.m. Monday through Friday, through Oct. 16. The Inasmuch Foundation Gallery is in Room 168 of the Visual and Performing Arts Center.