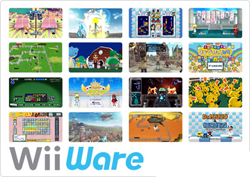 Powering on your Nintendo Wii is like hearing your favorite song on the radio: you smile stupidly, you wave your arms around, and you know all the words — or in this instance, the hand motions — by heart.

But sometimes the routine gets a little mundane. So the next time you fire up your system, give Super Smash Bros. Brawl a break and swing your cursor to the right, where you’ll find the Wii Shop Channel.

In this virtual store, you’ll find a hidden treasure called WiiWare, a service that allows players to download exclusive games made specifically for the Nintendo Wii console.

For prices mostly ranging between $5 and $10, gamers can download a plethora of titles directly to their console — no discs, memory cards, or extension cables required.

The games carry no expiration date; they will remain with your system forever unless you delete them.

A quick browsing of the WiiWare library reveals there is something for everyone.

Titles vary from the silly, such as “Enjoy Your Massage!” and “Lead the Meerkats” to the serious, like “Rage of the Gladiator” and “Military Madness.”

Not every WiiWare game is an original title. Official games from popular series like Pokémon and Final Fantasy also are included in the mix.

Although the games are priced cheaply, their quality easily matches — and sometimes exceeds — that of retail Nintendo Wii titles.

The gameplay is amazing, the content is new and original, and the graphics are everything you would expect in a game that costs more than four times the price.

That affordability is another terrific aspect of WiiWare.

Forking over 50 bucks every time a new video game drops on store shelves isn’t practical for most, but skipping a cup or two of Starbucks certainly isn’t a stretch.

So before you go out and buy the latest “Halo” or “Rock Band” installment, stop and take a look at what’s already available in your own home.

You’re sure to find something new — and you’re guaranteed to save a few dollars in the process.