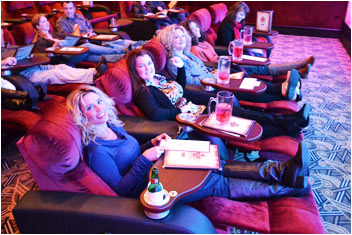 I always try going to matinee showings, if I even go to the movie theater at all, because of the typical I’m-a-broke-college-kid reason. So I made plans with my boyfriend Mitch to see “Argo” at 3:25 p.m. last week since I was getting off work at 3 p.m.

It is typical of I-35 south to have traffic at any given time of day. Once I realized, while sitting in standstill traffic, would not make it to the theater on time, I called Mitch and told him we would have to wait until the 4:05 p.m. showing.

Once I arrived I found him upstairs at the bar, to no surprise. Going back to being really cheap, we had never partaken in the Warren’s bar, restaurant, or any of its fine amenities, but since we had time to kill, why not?

As we began catching up on how each other’s days were, I took a gander around this really awesome upstairs portion that I had never seen before and noticed an area called the Director’s Suite.

We asked the bartender what it was and he offered to show it to us. Feeling slightly awkward for asking, we followed him.

There are two of these suites, each with about 40 oversized, cushioned, reclining chairs, each with a foot rest and seat warmer. Each chair had a mini table that rotated to position right in front of you to hold food that one can order just by pressing a button. The bartender said the button summons a waiter in less than three minutes. Talk about royalty.

He informed us this button can be pressed at anytime — before, during and after a movie — with the full menu and bar available.

We were thoroughly impressed, and equally sad that we were broke college kids who couldn’t afford the $22 seats, so we went back to the bar and the bartender seemed to disappear.

He showed up about two minutes later, saying if we had our regular $7 tickets, he could get us into the 3:25 p.m. Director’s Suite showing since it was not full. We knew we could not pass this up.

It was a really awesome movie-watching experience. I would highly recommend everyone splurge a little on their next date night at the Moore Warren Theater Director’s Suite. Who knows? Maybe you will get lucky, too.