Most will be familiar with the basic premise of “The Walking Dead” from seeing the popular television series on AMC or through Netflix.

If you have only seen the show, it is easy to dismiss it as just another zombie story, part of a genre so thoroughly explored that the only thing left is zombie parodies of other genres like “Pride and Prejudice, and Zombies” or “The Zombie Survival Guide.” 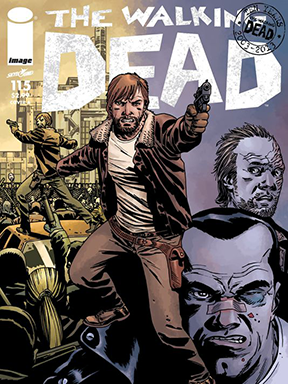 But the graphic novel the show is based on offers much more.

At its core “The Walking Dead” is a book about ideas. Writer Robert Kirkman makes the zombie genre fresh by stripping it down to one basic question: If you were to wake up tomorrow and modern world were gone with no explanation, how would you choose to live?

Structurally it is similar to other dystopian comics. “Y: The Last Man” uses a similar device to ask what the world would be like if all the men died tomorrow leaving only women.

“The Walking Dead” has more universal appeal, tackling issues like what makes us human, and the role of trust between individuals in constructing civilization. These issues are rooted in a single basic fact: sooner or later everybody dies.

“The Walking Dead,” has been in continuous publication since 2003.

This is remarkable because after more than a decade of publication the new material is every bit as strong as the first page of the series.

Kirkman indicated in a Reddit Q&A that he has the story plotted out through at least issue 300, which means there is nearly as much story still to come as has already been published.