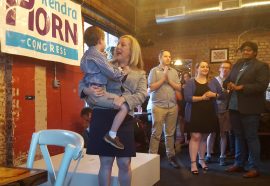 “It only took Republicans an extra two months of nasty party infighting to choose a candidate in the mold of failed Governor Mary Fallin,” said executive director Elisabeth Pearson. “Kevin Stitt is little more than a corrupt businessman who preyed on innocent people as CEO at one of the ‘shadiest’ mortgage companies in country. Not only would Stitt bring a special brand of corruption to the governor’s mansion, he would double down on Fallin’s failed policies and undermine Oklahoma’s future.

Oklahoma’s education system, Person said, has been left behind by the Fallin agenda. “Cuts have forced schools into four-day weeks and educators to take on up to six jobs. Stitt has promised to closely follow in the footsteps of the Fallin education plan—a disastrous prospect for Oklahoma’s children. Despite Oklahoma teachers ranking as some of the worst paid in the country, Stitt refused to support the raise they so desperately needed. Oklahomans deserve a governor who will prioritize Oklahoma and invest in its future.”

Voter turnout was down across the state. 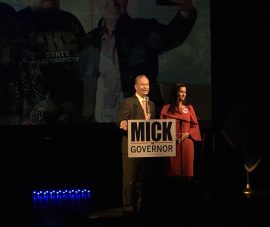 At Cornett’s watch party,  Phillip Milenr, a supporter said he believed that Cornett is “an upfront, honest man who strongly believes in the need to invest in education which will lead to more businesses investing in Oklahoma.”

At the Hillcrest family center voting station, Rhonda Torbett cast her vote with concerns. “It is time there was some ‘fresh blood’ in the office,” Torbett said, furthering her disappointment in how Cornett has been running things.

Precinct worker Regina Dyer urged young voters to go to the polls. “It is one of the most important things we can do in the United States,” Dyer said.  “I wish more people would have come out.”  The precinct reported that only 137 out of 1,000 potential voters actually cast a vote.

Like Torbett, the low turnout may point to the dissatisfaction of voters on how campaigns were viewed.  Former OCCC student and Navy veteran Dale Jones, voting at Southern Hills Baptist Church, stated that familiarity with the candidate was a driving factor in who he voted for.  He also commented on the negativity of the campaigns.  “Generally, negative ads steer me away from their candidate,” Jones said.  No matter how the vote turns out, Jones reasoned, “If you don’t vote, you have no reason to complain.”

Oklahoma voters will return to the polls again in November for the general election.