To the Pioneer and its readers:

My name is Brandon King and, until December 15, I am a staff writer for the OCCC Pioneer.

I won’t lie to you, this is one of the hardest letters I’ve had to write over the year and a half that I’ve been working here. But it’s a letter I felt was important.

As I walked into the Pioneer this morning, I stopped in the doorway of an empty office. The lights were on, yet not a sound could be heard, except for the hum of the air conditioning. My eyes drifted to the left side of the room. There, in a narrow edge of the room, sit five Mac computers that have been barely touched over a semester and a half.

It was at the second computer, the one closest to the door, where I started my path with the Pioneer.

Over a year and a half ago, I sat at the back edge of a classroom, not sure of the direction I wanted to take with my life. My head told me to follow the money and the rest would follow behind. My heart, the thumping rebel, screamed for originality in something, anything.

The class was for News Writing and the professor was a man named M. Scott Carter. While people rested themselves in the cold computer lab, a man in a yellow dress shirt made his way to the front of the classroom. It wasn’t what was said that made me listen. It was how it was said which made me crave more for something bigger than myself.

In the first class, I left in the darkness of a nearly empty parking lot feeling a craving for writing which I hadn’t felt in a long time. Writing had been my passion since I was twelve but it had taken a toll: my drinking and my depression over a job had drained any semblance of happiness.

I’d get halfway through a paragraph, begin to doubt myself, and step away for the night to wonder what the hell had happened to me. 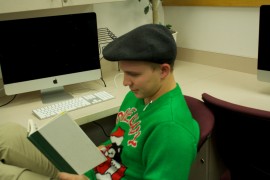 I used to spend a majority of my time working on new pieces of short stories and plays while reading anything I could get my hands on. Yet, at 22 years old, I sat in an apartment unable to produce a single creative thing. There wasn’t a week in which I didn’t feel like I was becoming more of a cog in a machine which couldn’t give a damn about me.

It’s not an exaggeration: this is the truth untold.

While I made my way to school for my second class for News Writing, I couldn’t help but think about what it meant to feel joy. There’s a difference between happiness and joy. Happiness is lackluster and cheap. It’s as fleeting as the changing winds of an Oklahoma plain.

From that night, I’ve attempted to read and write something new each day.

After writing for the class, Scott brought me to the front and asked me if I wanted to write for the OCCC Pioneer. As I was still working at my job for the hospital from 7 a.m. to 3 p.m., I would arrive at the office at 3:15 p.m. and begin to live again.

I cannot help but remember the faces of those who came before me. Sophia, Grace, Victor, Kevin, Aaron, and Derek. At this point, I hadn’t met Savannah and Chris but I had heard many things about them. It wasn’t long before I considered them more than coworkers.

There is something unsettling and beautiful in knowing you’re experiencing something that will influence the rest of your life. It’s like trying to dance just the right steps to an intricate waltz: God forbid you falter.

I’ve only had these moments three times in my life.

The first time was when I stepped onto the stage for theater class at Yukon High School. It was there in the tiny black box theater when I realized I had a voice. More importantly, I learned that my voice could change the world around me. Never again would I go quietly.

The second time was when I held the woman of my dreams in my arms. She lay there sleeping on my chest with her head towards the television. Amid all the white noise, it all failed in comparison to the thought that hasn’t left: I will spend the rest of my life with this angel. It’s too bad that we only have a lifetime to spend together. I could spend the rest of eternity and then some.

The third and final experience was my entire time working here at the Pioneer. Story after story, I could feel the madman and poet inside me collaborating to create something important. It was important to me, and I hope it was important for you as well.

There isn’t enough space on these pages to express how much I’ve learned over the year and a half I’ve spent here. How do you begin to express that which honed your craft and gave you a chance to prove what you’re worth?

Without the Pioneer, I wouldn’t be the writer I am now.

Without the Pioneer, I wouldn’t have the opportunities I’m going through with now.

Without the Pioneer, I wouldn’t have had the courage to quit my dead-end job and work on being the best American writer in history.

Give it time, I’ll make it happen.

For those who are reading, I want you to know that I, and the rest of the Pioneer, thank you for reading our work. We thank you for helping us promote the 1st Amendment and express ourselves as the up-and-coming generation.

For the Pioneer crew and Scott, I cannot thank you enough. You are the reason I strive and the reason I’m going to go beyond this state to show the world what this organization is made of.

At the end of the day, we are here as the human race hoping to be original in one way or another. We all want to be remembered for something we do. The world belongs to those crazy enough to live it.

From me to you, be crazy and show the world that you’re here to stay.

As for me, I’m going take the world out for a spin and show it I’m not going anywhere.