Motaz Al Azayza, 19, is a student at the Al-Azhar University in

the Gaza Strip. Motaz is a freelance portrait photographer. He is

He’s also a volunteer paramedic with the Red Crescent Organization.

For several weeks now, Motaz has been busy, due to the controversial decla-

ration of Jerusalem as the capital of Israel by President Trump.

Gaza strip, Red Crescent was requiring volunteers” he said. “I wanted to help

my people, I wanted to protest by helping save lives of these protestors.” he

Motaz said Palestinians don’t deserve the situation they are in today.

On May 14, the United States embassy opened in Jerusalem, relocated from

the city of Tel Aviv. The U.S., among many other nations, has opposed the

recognition of Jerusalem as the capital of Israel, since the state’s founding in

The embassy was moved as a result of The Jerusalem Embassy Act of 1995.

The purpose of the act was to move the embassy at the end of the 90s. The

However, the movement has been postponed by several past presidents, via

“I was standing by the ambulance with a colleague when I heard the blast,”

Motaz said. “Everything went blur in front of my eyes, I couldn’t feel my legs.

The next thing I know, I was in the back of our ambulance being carried to

against the Israeli occupation. 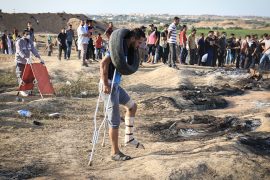 On June 22nd, right after prayers, Motaz rode with a colleague to the East

Al-Buriji border, in Gaza. “It was getting crowded very quickly, people were

Protestors brought handmade catapults to throw stones across the border

towards the Israeli armed force. Minutes into the protest, Israelis replied

with tear gas and live fire, injuring hundreds. Among the chaos Motaz saw

one protestor hit by a sniper shot very near to his ambulance, he ran with a

stretcher while a tear gas bomb hit his left femur.

a different or better result.”

The announcement followed by an emergency general assembly by the U.N.

as an attempt to stop the United States embassy move.

their decision, the votes strongly rejected the U.S. with the result of 128 to 9.

After the vote, the UN declared the December recognition of Jerusalem as

The debate has rages because both Israelis and Palestinians see Jerusalem

as their Capital. Trump’s announcement, which allowed Israel to gain interna-

tional recognition, reinforced the Israeli belief of their right for a Jewish state,

For Palestinians the move ends their hopes of a independent Palestinian

State with East Jerusalem as its capital.

Since the start of the Israeli occupation in Gaza, the economy of the small

area has collapsed. According to a recent World Bank report, Israeli block-

ades, war and poor governance has left 43 percent of Gazans out of jobs, and

placed the area in a financial crisis.

The fall in unemployment brought fear among young students and college

graduates. Hammad, whose name has been changed due to security concerns,

is a student at the Al-Azhar University of Gaza. Because he doesn’t have a job,

he comes to the protest every week.

“Jerusalem is not only for the Israelis, it’s our land as well,” he said.

Hammad believes taking Jerusalem is another step forward for Israelis to

occupy all over Palestine. “They took away jobs, killed so many lives and now

they want to occupy the whole land,” he said.

Mohammed Al Kharobi, a Gazan, has lost his entire life earning during

the verge of economic downfall last year. He joins the protestors every Friday

Risking his life in front of Israeli snipers, doesn’t scare him anymore. He

believes there will never be a solution.

“I want to get shot, so that I can get government fund to feed myself and my

Mohammed blames the Israeli occupation, the armed blockades and the

fear of war for the current economic disaster in Gaza. “I don’t have a job, but I

need money to survive. If I dont, I die. I am not afraid of death,” he said.

A WHO report stated since the start of the conflict, there have been 145

deaths and over 16,000 injuries in the occupied Palestinian Territory and

the deaths were from sniper shots and live firing.

“We often run out of ambulances to carry the injured to the hospital,” he

said. Most of the paramedics working for him are volunteers and often it’s

hard to find more paramedics since there are no paid positions.

Often snipers shoot at ambulances, Omar says that neither him nor his

team is afraid of death. But as the protest drags on, the Red Crescent Society

is running out of resources to help the injured.

“We often don’t have money for buying patrol for the ambulances, we need

Still, more and more civilians are joining the protestors at the border.

The major goal for Palestinian is to have the blockade lifted.

Israel claims a blockade is necessary to protect its citizens from “terrorism,

imported into Gaza that could potentially be used to make weapons.

The frustrations of the Palestinians has sparked many reactions over the

years in the forms of protests and rocket launches.

Since 2001, Palestinians have launched thousands of rockets from the Gaza

Strip. Those attacks have injured thousands and killed both Israelis and Pales-

Sderot, a city of approximately 22,000 residents, serves as a case study for

the psychological implications of sustained rocket and mortar attacks. Several

different studies have examined the impact of the violence on children.

miscarriages, and health issues correlated with constant stress of possible

International attempts to solve the Israeli-Palestine conflicts has been

effort to create states for both populations.

ate solution would establish Palestine as an independent state in

Gaza and the West Bank. A more controversial solution, the one state version,

would make the entire area as a single country, either Israel or Palestine.

There are countless issues, communication errors, general distrust, and

the promise to both entities made by other nations, that make any resolution

For Motaz, the photographer, solice is found in photography. He is a couple

years away from finishing college, but his work as a photographer has im-

“I want to pursue photography as a career, but with the current situation

I don’t think I can pursue my dream in Gaza,” he said. “I want to get out of

That may prove difficult. Gaza is under a complete blockade, Motaz’s hopes

of seeing the outside world are dim.