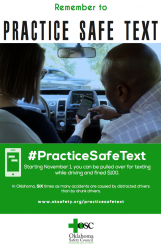 Drivers who text, post to social media, or enter an address into their GPS while driving could face a $100 fine beginning November 1, said Oklahoma Safety Council Executive Director Dave Koeneke.

Under the Trooper Nicholas Dees and Trooper Keith Burch Act, officers can pull over drivers who are manually entering text information into their cell phone, Koeneke said.

“For any function they do on the phone that requires punching buttons, they need to be able to push the button one time,” he said.

According to oklegislature.gov, the bill was signed into law in May 2015. It is named after two troopers who were struck by a vehicle while investigating an overturned tractor-trailer, a press release from Governor Mary Fallin states. Dees died at the scene and Burch was hospitalized. The driver was using a smartphone at the time.

Section 2-A of the bill reads,

“It shall be unlawful for any person to operate a motor vehicle on any street or highway within this state while using a hand-held electronic communication device to manually compose, send or read an electronic text message while the motor vehicle is in
motion.”

Koeneke said drivers can do anything that is voice activated, including voice-activated texting, bluetooth and hands-free. Talking on the phone is legal. Under the new law, surfing the web, posting to social media, emailing and selfies are illegal while driving.

He said because it’s a primary law, you don’t have to be driving unsafely or involved in an accident to be fined for texting. If the officer sees you texting, he or she can pull you over.

“Obviously they’ll see those signs — if the car is weaving, typically going slow — those are signs that someone is using a cell phone and probably not paying attention to the road,” he said.

while at the wheel, that’s the average time it takes to read or write a text — and that’s all it takes for our minds to disengage, Keoneke said.

“You’re choosing to put yourself in harm by not wearing a seatbelt,” he said. “If you’re

texting, you’re putting everybody else in harm because you’re all over the road, not paying attention.”

Koeneke said though texting at the stoplight is legal, he discourages it because it is easy to caught up in typing and cross the line from idling to driving.

“It’s real tough to put that phone down when you’re typing away and the light turns green,” he said. “You take your foot off the brake, you touch the accelerator and you’re considered moving.”

Koeneke said no points will be taken from driver’s license and there are no court costs associated with the fine. He also said police officers do not have the right to take your phone.

He said if you suspect someone may be texting and driving, you report it by calling 911 or calling the Oklahoma Highway Patrol at *55.

“Studies have shown that the reaction time of a texting driver is slower than that of a drunk driver,” he said.