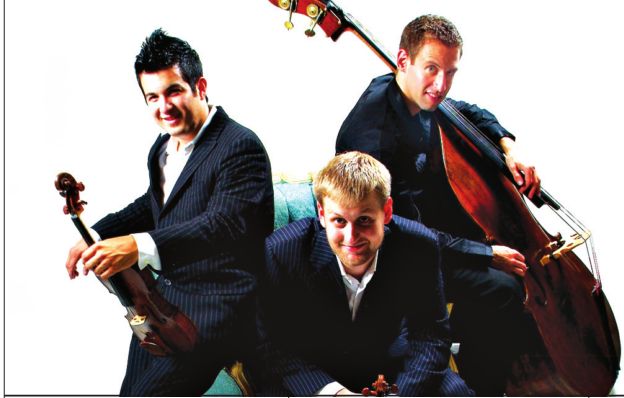 The classical string music group Time for Three is returning to OCCC at 7 p.m. Tuesday, Oct. 23, and will be performing in the Bruce Owen Theater.

The members of Time for Three are Zachary De Pue and Nicolas Kendall on violin and Ranaan Meyer, double bass.

The trio brings a unique sound that has a mix of country-western, gypsy, jazz, and even hip-hop in a classical music form, said Lemuel Bardeguez, OCCC director of Cultural Arts.

Bardeguez said the group likes to describe themselves as a “string garage band.”

“They are hard to describe because they consist of three highly skilled, very virtuosic performers,” said Bardeguez.

Time for Three created an adaptation to the song “Stronger” by Kanye West. The song includes an anti-bullying music video that can be viewed on the group’s website at www.tf3.com. This video gained the group much popularity and they were later interviewed on CNN, Bardeguez said.

The website traces the group’s origins to a stormy night in July of 2003. Meyer and De Pue were performing as members of the Philadelphia Orchestra at Philadelphia’s Mann Center. There was a lightning-induced power failure that caused all the lights to go out.

In the darkness, Meyer and De Pue performed an impromptu jam session. The crowd went wild and the ensemble gained instant attention.

Kendall has worked with internationally renowned violinist Victor Danchenko and maintains a strong interest in other musical instruments and genres including hip-hop.

Kendall is a member of the East Coast Chamber Orchestra and the Dryden String Quartet, all while being a member of Time for Three.

Last year was the first for the music trio to perform at OCCC. Bardeguez said they received a standing ovation at the end of their concert.

“We are really excited to have them back,” Bardeguez said. “They have wonderful adaptations of music.”

The group has performed at many different locations including the Indianapolis Symphony Orchestra, Club Yoshi’s in San Francisco, the Kennedy Center, and even the Schleswig-Holstein Festival in Germany.

In their 2011-2012 tour, Time for Three performed at Carnegie Hall, Princeton University, and had their first tour in South America, according to the group’s website.

The performers also work with children and while on tour like to go to nearby high schools to give inspirational speeches.

The group tries to give children a positive influence to look up to. The group plans to stop by some high schools in the Oklahoma City area, Bardeguez said.

This year will be the 14th year of the OCCC Cultural Arts program, Bardeguez said.