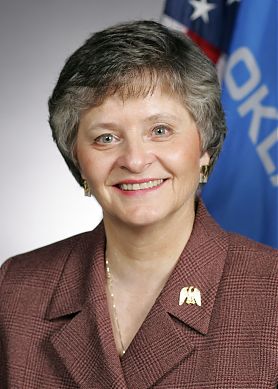 UPDATE: On Feb. 22, House Bill 1551, the Scientific Education and Academic Freedom Act, failed to pass the Oklahoma House of Representatives Common Education Committee. The vote was 9-7, according to an article published in The Oklahoman Feb. 23.

Oklahoma State Rep. Sally Kern (R-Warr Acres) has introduced a bill that some believe would hobble science departments in the presentation of their subject matter if it passes through the Legislature and is signed by the governor.

In an e-mail interview, Kern said House Bill 1551, the Scientific Education and Academic Freedom Act, is not about religion, but about science and what makes for the best science education.

“HB 1551 mandates that teachers follow the curriculum and teach the pro-evolution evidence. It also gives teachers academic freedom to teach the science that challenges the consensus view,” Kern said.

HB 1551 is one of two similar bills introduced in the Oklahoma Legislature this spring which address science education.

Critics have dismissed both bills as opposing the teaching of evolution under the guise of academic freedom.

In an e-mail interview, Chair-elect of Oklahomans for Excellence in Science Education Joseph D. Maness opposes HB 1551, saying it puts the teaching of science at risk.

“The legislation potentially creates the false impression that a religious belief or objection that does not require evidence has equal scientific standing with a theory that is thoroughly supported by evidence.”

Passing such legislation would not be in the best interests of Oklahomans, he said.

“It is not the legislation itself that is the problem,” Maness said. “It is its unintended consequences that are the problem.”

Kern said those who oppose HB 1551 essentially have only one talking point — they claim the bill promotes religion or creationism. She said that’s not the case.

“Courts have uniformly found that creationism is a religious viewpoint and thus illegal to teach in public school science classes,” Kern said.

“Those who love the First Amendment should be outraged.”

Kern said a similar bill passed in Louisiana in 2008 with strong bipartisan support and has never been challenged in court.

“Students cannot be expected to make well informed decisions if they’re only hearing part of the story,

Kern said HB 1551 provides an express statutory right to teachers who choose to objectively present the scientific strengths and weaknesses of scientific theories pertinent to the course without fear of any negative repercussion to their jobs.

In an e-mail interview, Richard Broughton, assistant professor of Oklahoma Biological Survey and Department of Zoology at the University of Oklahoma, said HB 1551 is unnecessary and confusing.

Broughton said his views do not necessarily represent those at OU.

“Teachers can already discuss scientific controversies in science classrooms,” he said. “What they cannot do is present social, political and religious controversies as if they were based in science.

“The science teachers of the state (Oklahoma Science Teachers Association) seem perfectly clear on what they can and should do in the classroom with respect to the established curriculum.

“The reason some teachers may be unsure of how to teach evolution, etc., is due to anti-science interference from some parents and members of the community.”

“The bill is needed because some teachers are unsure of the expectations and their rights as teachers concerning how they should present information on controversial scientific topics, such as global warming, biological evolution, chemical evolution, and human cloning.

“Allowing the communication of one viewpoint or theory and claiming it’s the only viewpoint is indoctrinating, not educating,” Kern said.

She said, at her urging, a teacher association took a poll of their members regarding HB 1551.

“The vast majority of them like it because it gives them clarity about how to teach all of evolution.”

Kern sidestepped the topic of Michael Talkington, the former OCCC biology professor who was accused of allegedly teaching intelligent design in his biology courses.

However, OCCC biology faculty offered their perspective that evolutionary theory is central to the teaching of biology.

Their position appears in a statement they issued on the National Center for Science Education website (ncseweb.org). A portion of the statement follows:

“It is the position of the Biology Faculty of OCCC that [Evolutionary Theory] is a crucial component of life science education.

“While the College respects the right of individuals to hold personal or opposing views, the biology program will teach Evolutionary Theory as the central concept of modern biological science.

“It is our intent that the explanatory power of this subject will contribute greatly to our students’ understanding of biology.”

On the topic of HB 1551, Vice President for Academic Affairs Felix Aquino, said legislation designed to advance science needs to be evidence based.

“Science is about evidence and explanation,” Aquino said.

“Remember, it’s scientific explanation and anything that can be backed up by science is fine.”

“We expect faculty to explain the phenomenon in terms of science,” he said.

Kern said HB 1551 does not authorize the teaching of creationism or intelligent design.

She said HB 1551 bill does not require any change to the curriculum and topics like evolution will still be taught if this bill passes.

HB 1551 is scheduled to be heard in this session by the Oklahoma House of Representatives but as of press time, is yet to go before a committee.