A man drives a black car down a city street. A cigarette hangs from his lip. From the cell phone cradled to his ear, his wife’s voice scolds him for smoking in the new car. The man promises he is quitting. As he throws the cigarette out the window, he hangs up. He takes a breath, smiles and reaches down to light another cigarette. 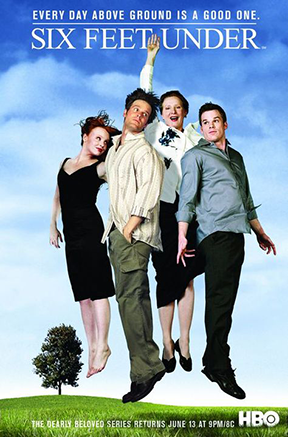 Distracted, he never sees the oncoming bus that ends his life. The car is a hearse.

You can never tell when death will catch up to someone. The characters at the heart of the award winning HBO series “Six Feet Under” know this better than most.

As proprietors of a funeral home, dealing with death is literally the family business. Yet, when patriarch and funeral home director Nathaniel Fisher is suddenly killed in the first episode, each member of the Fisher family struggles to cope with the loss just like anyone else.

The scenes in “Six Feet Under” are well shot, and the sunny California setting is an interesting contrast to the somber subject matter, but the strength of the show comes from good casting and good writing.

Michael C. Hall, who went on to star in another macabre TV drama “Dexter,” stands out among an excellent cast in his role as David Fisher, the closeted gay younger son who feels duty bound to carry on the family business even as the need to repress a portion of his identity sometimes causes him to rebel and resent the people around him.

What hides under the facade people present to the world is a recurring theme reminiscent of another show, David Lynch’s “Twin Peaks.”

Whether it is Claire Fisher’s experimentation with drugs, the affairs of mother, Ruth Fisher, or the potentially lethal medical condition older brother Nate Fisher keeps hidden, each character carries secrets.

The way the deceased appear and talk to living characters, not as supernatural entities but as a depiction of their internal monologues, adds to the feeling that what is buried is not always dead.