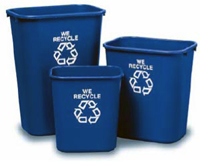 OCCC has over 40 recycling bins for plastic bottles and cans on campus at several locations.

In the Family and Community Education Center, there are two bins, one in front of entrance A.

The other is located across from the John Glenn Main Entrance.

On the first floor of the library, there are two bins placed next to the men’s and women’s bathrooms on the west side entrance.

The second floor of the library has two placed on opposite ends of the floor in front of the bathrooms.

The fourth floor of the library also contains two bins, placed on opposite ends in front of the bathroom doors.

The John Massey Center has one placed at the end of the walkway entrance, and another in the northern corner of Human Resources area and one in front of UL319, in the upper level.

The Arts and Humanities Center contains three, one by the staircase, by Main Building entrance, and one by the theater.

The first floor of the Health Professions Center contains only one bin near the stairway.

The second floor contains two, one by room 226 and the other across from the stairs by room 215.

There is a single bin strategically placed on the west side of the courtyard.

The Science, Engineering and Math Center also has two bins. The first is by room 1S3, and the other is at the entrance on the east side of the building.

The third floor of the Main Building has two as well, and they are by the stairs, and by room 3N5.

The campus also has two high-tech Pepsico recycling bins. One is located in the food court, and the other is about 30 feet east of the coffee shop.

For more information on how to recycle, contact Gary Phillips, building and campus services supervisor, at 405-682-7592.