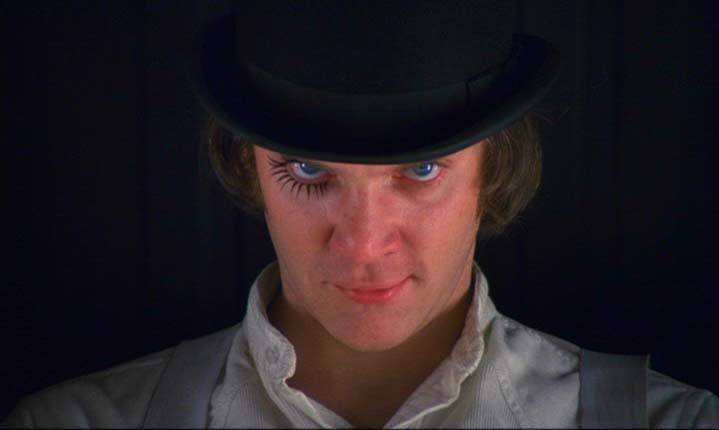 The favorite 1971 Stanley Kubrick film, “A Clockwork Orange” still teaches ideas of social and political life which continue to be relevant in modern society.

This film was originally a novel by Anthony Burgess, and was made into a screen play by Kubrick, who at the time was working on the film “2001: A Space Odyssey,” and became inspired to create another science fiction classic.

When the film was originally released it was X-rated, but after the cut of a vulgar sex scene, the movie is now R-rated.

It runs approximately 136 minutes and not one second drags or lacks.

Kubrick had seen a previous performance by Malcolm McDowell in the movie “The Rebel” and decided for “A Clockwork Orange” to reach its vast potential McDowell should play the lead character Alex.

McDowell brings conviction and a strange haunting quality to the film, as he portrays a sinister villain and murderer who has been transformed into a defenseless man by medical experiments and then reverted back into a psychopathic drug-loving thug.

This science fiction film describes what a future world could mold itself into.

Aside from neon hair colors and public sex raids, Kubrick is fairly accurate from his 1971 perspective.

The theme of the movie shows that man has to make the choice of what he makes of himself and that if iniquity is chosen, it becomes a fatal yet alluring disease.

When released, “A Clockwork Orange” awed audiences through its ability to show the disgust and angst in life.

It reveals how the government system operates behind closed doors and portrays people as they truly are by illustrating what everyone thinks, but dares not say.

Cinematography of this piece projects radiant scenes, whether it is a shot of nature or a set stage like that of the psychedelic “Milk Bar.”

Kubrick uses balance and wide expanded views to make the viewer see and undergo the same emotions as the characters.

Yet, the power lay within the score of the movie and each captivating shot is accompanied by the sounds of classical music such as Beethoven’s Ninth Symphony.

Though Kubrick died in 1999, this movie continues to breathe life into the decaying film industry because of the progressive thoughts and concepts it offers.

“A Clockwork Orange” blazed the trails and raised the questions that made possible films directed by Peter Jackson, Steven Spielberg, George Lucas and Christopher Nolan.

Not only is “A Clockwork Orange” a classic, it is a revolution for those who dare venture into its madness.

This film will breed thoughts and develop ideas foreign to the viewer. To not watch this film is insanity.