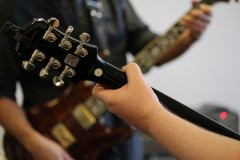 In music, there’s no better feeling than learning through recreating.

The Oklahoma City Community College’s Student Rock Band will shake the campus with a performance on Oct. 25.

The band, led lead by Guitar Instructor and Adjunct Professor Justin Mettry, will play a mix of hard rock, classic rock, and rock ballads. Members of the band include Brian Chilcoat on drums, Christopher Dake on guitar, Tyler Samson on bass, Conner Kennedy on lead guitar, and Mettry on vocals and backup guitar.

Mettry said he found music wherever life took him. And though his school did not have an arts program, Mettry found ways to play on his own.

“If you wanted to play music you had to join the marching band, that’s really it. If you didn’t play a horn or percussion or whatever it may be, you just couldn’t lay music in school,” he said.

He started on the piano when he was six years old, but it was really the guitar that drew him to music. “It wasn’t until I finally convinced my mom that I could take care of a guitar and that I would play it, you know, that it wouldn’t go to waste. Little did they know it was just, from then on, just became a part of me,” he said.

Mettry said he earned a Masters in Jazz Studies at the UCO Jazz lab. The competitive nature of the program, he said, was kind of a sink or swim situation.

That’s when he met former OCCC Music instructor Jose Gabaldon, one of his peers who was going through the same motions. “We noticed we had a lot of the same influences and sort of followed the same path that had let us to the program,” he said. “We started playing together on projects and formed a competitive relationship where you make each other better.” 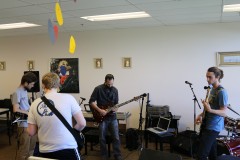 Gabaldon started teaching at OCCC and noticed a void in the music department, Mettry said. “OCCC had a Blues band and a Jazz band, but there’s talent here that can be nurtured, but no place for them. That’s where it started,” he said.