Life at The Bar: Where Everyone has a Story to Tell

That’s how every episode starts. Behind the bar, I’m just the tangential observer of a thousand different TV shows, playing all at once. Some have been running for nearly two decades; others never make it past the pilot.

No trope is out of place at the bar—every flavor of life is represented. There are frenetic, slapstick comedies and somber, smoldering tragedies. There is action: tempers flare when alcohol coaxes men to succumb to testosterone. I have heard the sound of gunshots from an attempted murder, followed by droves of people fleeing the building like ants from a kicked-over mound.

I see all the shades of love, a vast mosaic featuring more colors than you’d think. I see the tender moments before the ravishing love scene, and I see the beautiful stability of a steadfast, lifelong romance.

I’ve seen married couples, perfect in their blissful monogamy; they could’ve stepped right out of a Norman Rockwell painting. I’ve also seen the husbands of those perfect marriages come in the next night with another woman—and no, she’s never his sister.

I like to think I have some control over how much screen time each character gets, but the shows write themselves—directed by the innate need for connection shared by all of us.

At the core of our viewing schedule is the weekly must-see program: Cougar Night, airing every Thursday from April to September. This one is wild and colorful. It’s the story of every single woman of ages 35 to 60, looking to have a fun night of music, dancing, free drinks, and maybe a night with Mr. Right Now.

It’s also the story of every Mr. Not Right Now, every Mr. Maybe After Another Round, and every Mr. Never In A Million Years. They all throw caution to the wind and hope their particular twist on the mating dance is good enough to let them leave with more than just an extra bar tab.

But these are all the extras in this show—a sea of rotating faces filling in the gaps between the main characters. That’s where this show really shines. There’s Bill, an enigmatic regular whose own show bleeds into all the others. We’ll come back to Bill later. There’s also Mustang, also known as everyone’s corny jokester uncle.

Have you heard the joke about the ship captain’s brown pants? Doesn’t matter, Mustang is already telling it to you again. He tries to turn his drink orders into jokes, too. They get convoluted very quickly. Instead of a Bacardi and Coke, Mustang says “This time, make it a Front-yardy and Coke.” You got it, Mustang. Oh, a Margarita this time? “Yeah, make mine sunny-side up.”

Sorry Mustang, this one’s over easy.

The crowd favorite is Neil, a tall DJ and former bartender. Neil always brings us cookies, chocolates, and Cheez-its. We love Neil. Providing him a contrasting foil is Eddy, the loud and abrasive wino who loves nothing more than yelling his political views to everyone unlucky enough to be within earshot.

Bud Light Bob also makes an appearance every Thursday, but he never has more than two or three lines. He’s really just there for continuity. Bud Light Bob always gets the same thing. Can you guess what it is?

Good guess, but you’re wrong. Bud Light Bob has been ordering Michelob Ultra for about three months now, after 15 years of only ordering his namesake domestic pisswater. We’ve tried changing his nickname, but neither “MichelBob” nor “Ultra Bob” has stuck so far. The change has thrown reality into imbalance. Centuries from now, astronomer-bots will point to this moment as the true fulcrum that kicked off the impending heat-death of the universe.

Anyway, Bud Light Bob always brings a friend who never tips, no matter what he orders. The bar staff compensates by no longer asking what he wants.

We ignore him, and he ignores us. Everyone is happy.

These characters make for a well-rounded cast, and it gives Cougar Night a sense of comfort and familiarity. That’s all too necessary, because it is impossible to predict what will happen on a given episode. Drunk men whose mating dances were unsuccessful will throw punches at cops. The night’s band might get in a fight and break up while packing their equipment. Or just as you think things are winding down, there goes a middle-aged woman stripping to her underwear on the crowded dance floor. 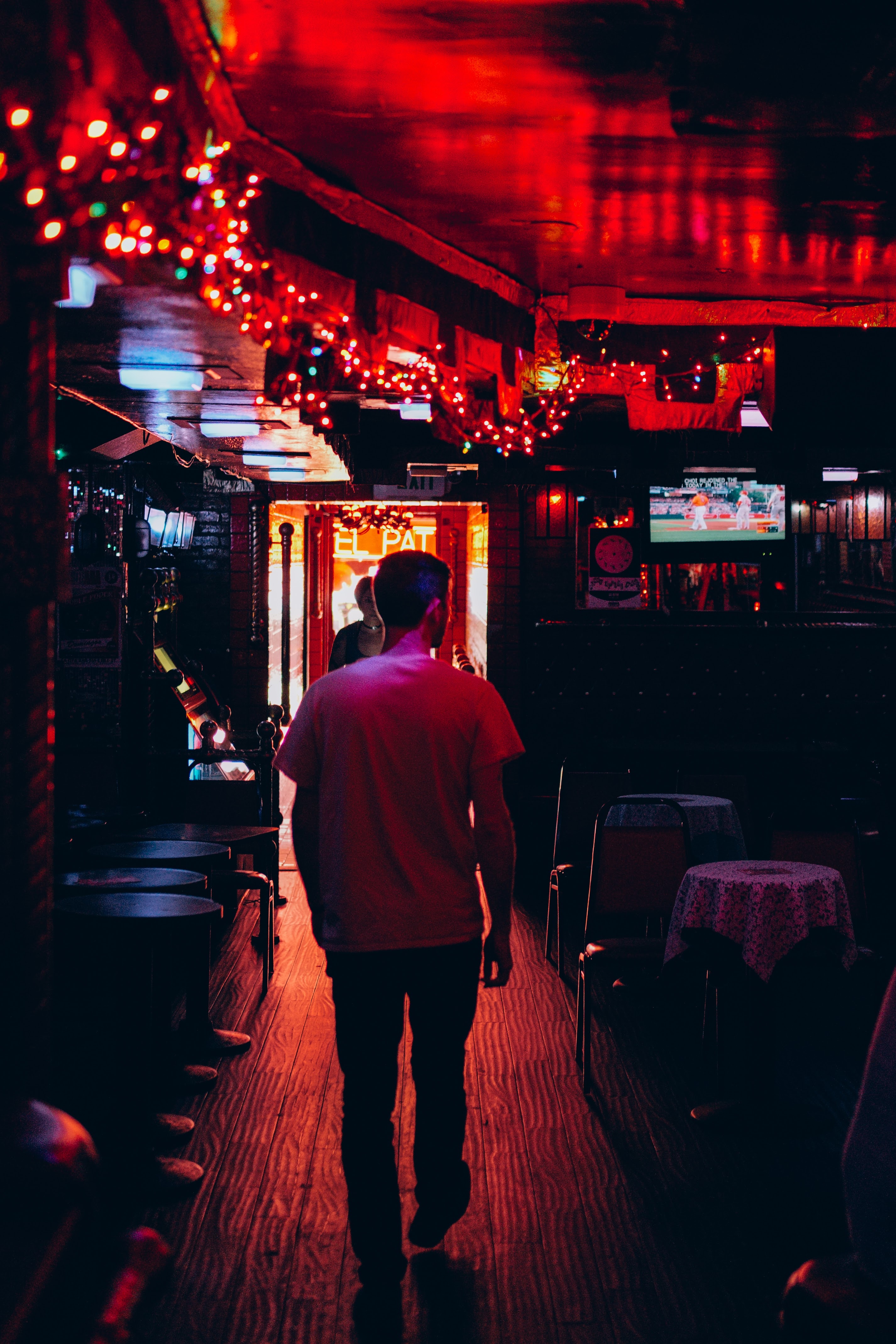 If Cougar Night is the weekly must-see sitcom, then Clockwork, the other big show, is like the nightly news: it’s a constant; it’s comforting in its stability; and it is depressing. Clockwork is the story of one character. I told you we’d come back to Bill, right? Well here he is, the star of his own show every night.

Clockwork Bill is in his sixties, and he shows up every day—seven days a week, 365 days a year—within ten minutes of our restaurant opening its doors for the day. We see Bill on Thanksgiving, we see Bill on Christmas, and we see Bill on New Year’s. We even see Bill on his own birthday.

Bill’s backstory is revealed slowly, in bits and pieces. Immediately apparent is his absolute physical dependence on alcohol. He strolls up to the bar every day, his addiction propelling him through the door like a wind-up toy. At first, his hands are almost too shaky to even hold his drink. By the time he finishes his first round, the difference is day and night: Bill’s hands are as steady as Dirty Harry with a hand cannon.

Once he’s got some of that sweet poison his body now needs, Bill might actually speak once or twice. After four or five rounds, he’s downright expressive. He’ll burst into laughter with ease, and flash that mischievous smile that becomes more common the more he drinks. If you’re lucky, he might even share a personal detail or two with you.

Bill has neither seen, nor spoken to his daughter for nearly a decade. He tries not to let on, but once you’ve watched him enough, you can see that it’s created a chasm in his soul. He tries to fill that loveless void with whiskey, with his bartenders, and with whoever happens to order a drink beside him.

Bill’s interactions with us show that he cares more than the average patron. Anytime someone starts getting mean or rude with the bar staff, Bill jumps in and intercedes on our behalf. Bill has the bartender’s best interests at heart when other customers treat us like a soulless plot device to their own story.

In the peripherals of Clockwork Bill’s stability and Cougar Night’s endearing ensemble are all sorts of spin-offs and failed pilots. Some of them are unremarkable, and some were too bold for their own good. In the latter category falls the story of Glenn the Vampire.

Several years ago, a man named Glenn found out about Cougar Night. He wanted in. But Glenn wouldn’t rely on dumb luck in his efforts to attract a lady; no, Glenn went the extra mile. Glenn wanted to stand out on the dance floor, and so he made himself a vest. Out of sequins.

Hilariously, this somehow worked. Glenn finds a female who wants to dance with him, and they have a great time. Glenn is really getting into it. Pretty decent plot so far, right? Relatability, humor, even some sizzle. But Glenn gets carried away with his dance partner. He bites her. That’s not so bad, right? Plenty of people like that kind of thing.

Except Glenn bit through her skin—she started bleeding. She screams, the cops are called, and Glenn the Sparkly Sequined Vampire flees the scene. Exit stage left; curtains; credits; canceled. Glenn is now banned from stepping foot on the premises, although I imagine he still follows that rule about vampires needing an invitation. Who knows, maybe he gets a reboot in a year or two.

Sharing Glenn’s weird end of our viewing spectrum is the older couple who comes in once every blue moon. They’re each well into their sixties, but don’t tell that to their libido. She tends to wear bewilderingly provocative skirts, intending to recruit a lucky(?) guy or gal to their bed for a ménage-a-trois.

Our look never extends into their bedroom for these encounters, thankfully. But if for some reason that piques your interest, then you’re potentially in luck, if you can somehow get ahold of them. That’s because they film everything.

I’ll stop for a moment so you can scrub your eyeballs after reading that.

All these stories, and all of these characters have taught me a few things, but only one of them matters here. Empathy goes a long way, even if you only want one beer. That’s because people are watching you. The bartenders may seem like the stage performers for your night, but you’re really the one in the spotlight. So think about your lines, and craft your story carefully.

You don’t want to get canceled.