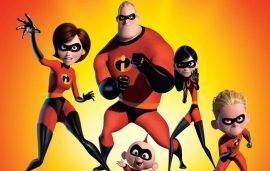 On  Friday June 15th Disney-Pixar released the highly anticipated movie, Incredibles 2. The film is follow up to the original Incredibles movie released in 2004. Disney’s Incredibles is unlike any other film they’ve released. The movie follows a superhero family forced into hiding, after public opinion turns on them.

Bob, the father, gets a convincing message persuading him to become Mr. Incredible again to fight crime and villains. After a visit with Edna, who designed the family’s superhero suits, Helen finds Bob to help him with the kids following.

Brad Bird, the direction of the first Incredibles movie, returns for the sequel. All voice actors but one returned for the sequel as well. Dash was the only character to be recast.

The sequel picks up right where the last one left off. The Incredibles fight the villain the Underminer which we see in the last scene of the first movie. The heroes get caught by the law for the damage they caused. After an interrogation from some stubborn cops, the family must go into hiding again to avoid the legal consequences of being a superhero.

With a fourteen year gap between the two movies references are bound to be made.

The first is Violet. Originally a moody teenage girl, Violet tells her little brother — the energetic fast paced Dash — to wash his hands before eating. Another callback to the original Frozone’s unforgettable banter with his wife when he goes to grab his super suit.

Soon we meet a new character, Winston Deavor and his sister Evelyn. Winston approaches the hero’s with a plan to change public opinions and laws about superheroes. This plan puts Elastic Girl in the spotlight, which is a shift from the first movie with Mr. Incredible as the lead.

The change puts Helen in a tough position. At first he was against the idea of breaking the law, but makes the decision to go with Winston’s plan, saying “to help the family I have to leave it, to fix the law I have to break it.”

With Helen doing hero duties Bob faces the struggles of being a stay at home dad.

Elastic Girl gets a new suit and her own motorbike before being sent off to save the public. After saving a train full of people, Elastic girl meets a new villain, Screenslaver.

This new villain uses technology to hypnotize and control people. While Helen is trying to get one step ahead of Screenslaver, Bob is at home facing battles of his own.

In a humorous fight with a raccoon Jack Jack uses his multiple powers, which we got a glimpse of in the previous movie.  Most superheroes have one signature power, while Jack Jack possesses many making him unique. Unsure of what to do, Bob takes Jack Jack to a familiar face, Edna the costume designer, to design a suit fit for controlling Jack Jack’s powers.

Later into the movie a few new faces in the superhero universe appear expanding the community of heros beyond just the Incredibles and family friend, Frozone. Screenslaver captures Elastic Girl and puts her and all other superheroes under hypnosis. After getting a call Mr. Incredible and Frozone find themselves under the same hypnosis. This leaves up to the kids to save their parents so as a team they can save everyone else once more.

Overall, the movie lived up to the hype and anticipation. It was the ideal example of what a sequel should be. The storyline picks up right where the last movie left us off, making the progression of these characters feel natural.

Lately in Hollywood, sequels and remakes of popular films have put a female twist on classics and favorites. This trend causes some of those films to feel unnecessary or like they’re being catering to a specific audience.

This isn’t the case with Incredibles 2. The plot line of putting Elastic Girl in the forefront to save hero’s reputation parallels with the first movie — we see Mr. Incredible bring the necessity of heros back.

By taking this route Disney and Pixar have the possibility for three more potential storylines with the children Jack Jack, Dash, and Violet. The humor, mixed with crisp animation, familiar faces, and new storylines makes for the perfect blend of nostalgia and freshness — somet Disney has been accomplishing with reboots of their classics and fan favorites.