“Happy Death Day” is just another reminder of why you should be try to be a good person and not go down that dark tunnel.

The main character, Tree — which of all names to pick for a character you’re going to pick Tree — is a selfish sorority college student.

After waking up in a random guy’s dorm room, she’s rude to the guy she thinks she spent the night with and storms out. When people try to talk or wave hi to her, she ignores them. It’s her birthday, and she keeps blowing off her father’s phone calls. Her roommate gives her a birthday cupcake and Tree throws it in the trash right in front of her. And to top it all off, she’s having an affair with her professor.

As I was watching I thought to myself, “You’re an awful person. You deserve to die.” That sounds harsh, but Karma will get you in the end, and yes, she kind of had it coming. 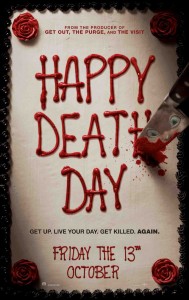 After her death, she immediately wakes up in the random guy’s dorm room again feeling confused and shaken. The day repeats itself. She keeps having deja-vu.

After a couple of deaths, she realizes this is not a dream anymore and doesn’t understand why her birthday keeps repeating. Tree confides in Carter, the guy in the dorm room. He hears her out and helps her figure out possible killers.

She spends the rest of the movie figuring out clues and every night continues to die. Each day she comes back, but she’s getting weaker and weaker.  She doesn’t have a lot of time left to find her killer.

The movie overall was okay. It was cheesy and had a lot of puns in it that I didn’t think were all that funny but everyone in the audience thought were hilarious. Still, it was funnier than I thought it would be. The trailer made it seem to be a serious thriller.

The concept is really interesting; it’s just like Groundhog Day but only with murder. It had good suspenseful parts in the movie that really made me jump and sink in my seat.

If Tree was smart, and a nice person, she wouldn’t have died in the first place. Which is why I’m going to give five rules on how to survive in horror movies and in life.

Be a good person, it pays in the end. And most importantly, be smart and be safe.