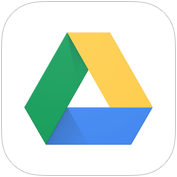 Apps designed for organizing, sharing and productivity are usually garbage.

Google Drive however, is not such an app.

Mobile Drive has the option to take a picture from within the app and save it directly to drive. It also can scan documents and save them as a PDF.

Back in high school, where printer and Internet access were tightly controlled, just moving your files around could be a nightmare — due to storage, file types, bad Internet connections.

Google Drive simplifies things instead of making them more complicated.

It integrates many tools and features into an accessible mobile package.

Group editing of the same document simultaneously is neat.

An office linking all their computers together on drive is spectacular.

What Microsoft doesn’t want you to know while it pushes its Onenote Office 365 garbage, is that Google beat them to the game.

They took Microsoft Office, made it better, and put it online for free with a bunch of other tools.

Using the Chrome browser, one can add further extensions and features to the drive.

Google Drive makes it so that if your computer has an Internet connection, you have access to phenomenal sharing, storage and creative abilities.

These days, tech people are realizing the app market is flooded with widgets so now, the trick is to integrate apps combining features and information, while also reducing steps, loading screens and complexity for various tasks.

Google is, as usual, ahead of the curve.

Products like Google Drive now being totally usable from almost any smartphone isn’t just flashy, it is innovative.

Other apps do similar things, but Google Drive brings what would be 10 apps down to 1.