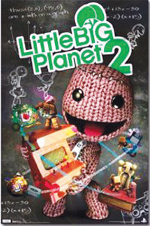 “Little Big Planet 2” is an extremely strange game, though it is really fun.

Unfortunately, the main story can be played in about six hours, barring the mini-games.

The mini-games are insanely challenging most of the time, but ridiculously fun.

The main point of the game is to save the world, as is the norm for many of the games.

What happens is a psychedelic explosion of colors, sounds and disco remixes of classical orchestra music.

It’s about as interactive as Kirby’s “Epic Yarn,” though the graphics are much more realistic.

The high-definition capabilities might be wasted on bits of carpet, burlap and cardboard.

Despite the graphics engine being a little overpowered, the visuals are stunning and the different textures are done perfectly.

Collection is a huge part of the game. It’s the secondary objective of the game, really. You go and pick up bubbles with stickers, outfits, skins and accessories for your sackboy.

Character customization is another heavy point in this game. The items you collect will mostly be used to change the appearance of your character.

My personal favorite character design is a clockwork knight.

The game has room for four characters which makes the game a lot of fun for everybody. In fact, some parts of the game require up to four people to complete though they aren’t required to complete the game.

Overall, the game is quirky, extremely entertaining﻿ and very challenging.

“Little Big Planet 2” only for the PlayStation 3 is rated E and will run you around $60 retail, though you might be able to get it cheaper used.

I would suggest buying this game for the replay value attached as well as everything that you can do in it.