Freedom of speech, even for Milo 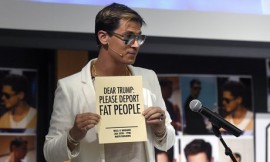 Yiannopoulos is known for being a right-wing speaker, and is a former editor of far-right outlet Breitbart News. Yiannopoulos resigned from his editor position Wednesday, after past statements concerning pedophilia resurfaced in the media.

With Yiannopoulos’ fame stemming from his off-color commentary and offensive speaking material, he’s been met with heavy opposition from the left. A January speaking engagement at UC Davis was also canceled due to protests, leaving Yiannopoulos crusading for the freedom of speech in retaliation.

President Trump himself weighed in on the cancellation of Yiannopoulos’ event, tweeting, “If U.C. Berkeley does not allow free speech and practices violence on innocent people with a different point of view – NO FEDERAL FUNDS?”

The right claims that keeping Yiannopoulos from speaking is an infringement on the First Amendment, while the left says Yiannopoulos’ presentations are filled with abhorrent hate speech that shouldn’t be endorsed on a college campus. The intersection of free speech and hate speech is where the disagreements arise; who’s right? Who’s wrong?

The interpretive considerations of the constitution tell us that Yiannopoulos SHOULD be allowed to speak at publicly funded institutions, but only after proper invitation and application. If Yiannopoulos is invited by a club or organization on campus to speak, he is afforded every right to speech under the First Amendment.

If Yiannopoulos were to informally show up to a campus uninvited, the Newseum Institute outlines that a public college or university is “constitutionally permitted to place certain time, place, manner, and (in very limited circumstances) even content-based restrictions on speech, as long as the restrictions are reasonable, apply to everyone, are in line with the school’s educational mission, and do not discriminate according to viewpoint.” However, when a forum is formally opened on college grounds, First Amendment rights are back in full swing.

UC Berkeley said in a statement after the protests, “While Yiannopoulos’ views, tactics and rhetoric are profoundly contrary to our own, we are bound by the Constitution, the law, our values and the campus’s Principles of Community to enable free expression across the full spectrum of opinion and perspective.”

In the 1972 Healy v. James U.S. Supreme Court Case, it was stated that “State colleges and universities are not enclaves immune from the sweep of the First Amendment.” Whether college campuses should endorse a speaker or not is up to the college’s own objections, but regardless of endorsement, Yiannopoulos was a constitutionally protected speaker.

The left’s diagnosis of Yiannopoulos’ commentary as “hate speech” is not unfounded. However, to censor or silence his vulgarities or offensive views would stifle the freedom of expression that the democratic left so often values.

Geoffrey R. Stone writes in Perilous Times, “To meet the responsibilities of democracy, individuals must have access to a broad spectrum of opinions, ideas, and information. For the government to censor public debate because it thinks a particular speaker unwise or ill informed would usurp the authority of citizens to make their own judgments about such matters and thus undermines the very essence of self-government.”

Free speech allows the emergence of healthy and essential traits of a working democracy. Tolerance of varying ideas, skepticism, independence of thoughts, and the criticism of authority are all parts of free speech that each of us, regardless of political ideology, take advantage of. To restrict one voice sets the precedent to restrict another.

The American Civil Liberties Union famously supported the rights of a neo-Nazi group to march through Skokie, a Chicago suburb, in 1978. The suburb was known for having a high number of residents who were Holocaust survivors, making the march of the neo-Nazis notable. The ACLU defended the neo- Nazi group’s right to free speech with the same laws that were cited when Civil Rights era protests were threatened to be shut down by southern cities.

When discussing free speech on college campuses, the ACLU stands by that same principle of protecting everyone’s right to expression, without policing what they have to say.

“Many universities, under pressure to respond to the concerns of those who are the objects of hate, have adopted codes or policies prohibiting speech that offends any group based on race, gender, ethnicity, religion or sexual orientation,” the ACLU website says. “That’s the wrong response, well-meaning or not. The First Amendment to the United States Constitution protects speech no matter how offensive its content. Speech codes adopted by government-financed state colleges and universities amount to government censorship, in violation of the Constitution.”

When we silence the opposition, we cannot hear what they are thinking, feeling, believing, or seeing. We cannot understand how they’ve come to their positions without hearing what they have to say. When hate speech is right in front of us, we can see the problem and learn how to address it. We must embrace every voice, even if it says exactly what we are fighting against.  To end discrimination, hate speech, prejudice, and intolerance, we must tolerate and welcome the free discussion of every voice, hateful or loving.