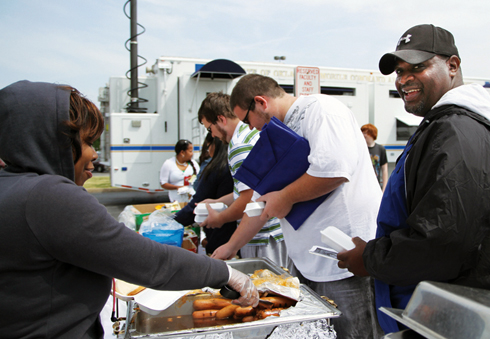 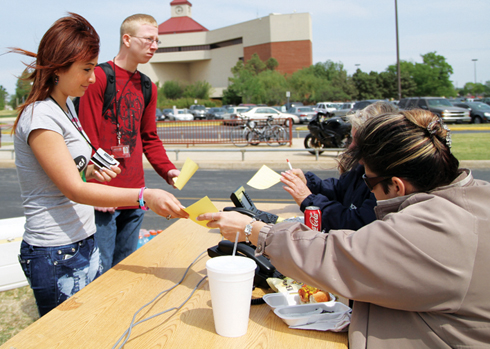 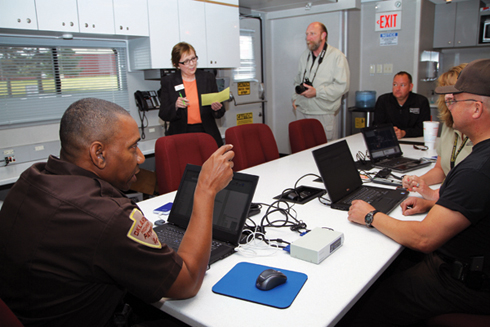 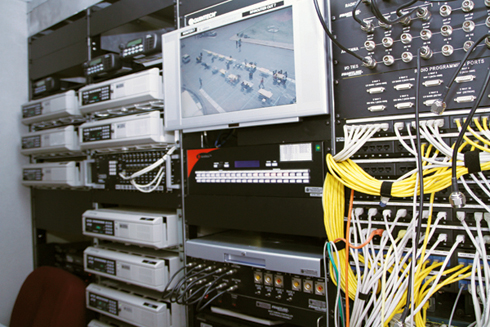 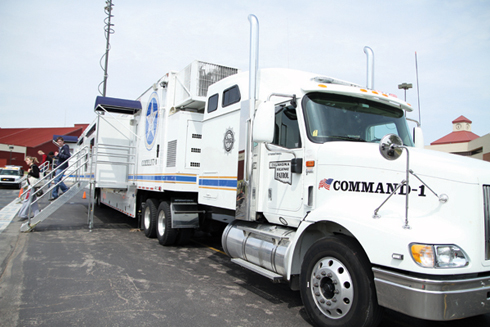 Rachel Morrison/Pioneer
Students tour Oklahoma Highway Patrol Command-1 Mobile Communications Unit during Meet Your First Responder Day April 20. The 1.5 million dollar mobile unit purchased through Homeland Security is one of only four units in the Country. In addition to Oklahoma’s mobile unit, two other units are located on the West Coast and one more on the East Coast. The communications unit contains a radio tower, several computers, sattelite communications technology and a radio room which combined help aid multi-department efforts during a disaster. (Photo by Rachel Morrison)
1 | 2 | 3 | 4 | 5

New technology to alert students of an emergency on campus was introduced on First Responder Day April 20 in parking lot A near the library.

“The event served as a meet-and-greet for students and the first responder community,” said Dave Anderson, Information Technology and Infrastructure director at OCCC.

Anderson was at the event to introduce computer software that would cut into a student’s computer and alert the student in case of an emergency on campus. The program is provided by Alertus through grant money, Anderson said.

“The program will temporarily interrupt the computer the student is using on campus, or their PC, if they choose to sign up for the service,” Anderson said.

“It would alert the student in case of a fire, severe weather threatening OCCC or any security issue.”

He said the system should be up and running by fall semester.

“A college degree increases the likelihood of acceptance to the program, as well as military experience, but neither is necessary. We are here to meet the students and say hello.

“Also there’s a squad car, the bomb squad and a police surveillance helicopter here on display.”

Lt. Charles Avery from the

Oklahoma County Sheriff’s Department also was representing local law enforcement. Avery said he too,was there for recruitment purposes, and like the police department, was there to display some of the technology his department employs.

“We’ve got one of our fully loaded Ford Mustang units here to break the ice with the students, but our high-speed unit is a Dodge Challenger,” Avery said. “The Mustang draws in the attention, but the Challenger actually chases offenders.”

Avery, a Cameron University Business Administration graduate, said he started with the department when he was 23 as a traffic officer.

Now 33, Cameron said he has reached his current position with some diligent hard work.

“There is a tremendous amount of room for advancement for any hard-working go-getter,” he said.

“Anyone with a sound work ethic can advance in the department.”

The local ambulance service, EMSA, was represented by Raymond Farrow. A graduate of Martin Community College in Kansas, Farrow said he has been an EMSA paramedic since 2001.

He said he likes the constant activity of moving quickly from call to call. Farrow said EMSA was there to display the equipment he uses on a daily basis.

“They can come out here, have the necessary paperwork signed by the exhibitors and avoid sitting through a more mundane meeting,” Owen said.

“This setting is far more hands-on than a certification in a classroom setting.”

“The inside of the EMSA ambulance is fascinating, and the mobile command unit is enormous,” she said. Hurt also was impressed by Air One, the Oklahoma Highway Patrol helicopter.