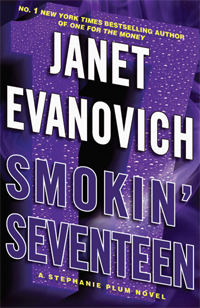 Stephanie is in for more trouble than ever when it comes to her romances in this latest book.

Unable to decide between the sexy, hard cop Joseph Morelli and even hotter professional bad boy Ranger, what will happen when high school football player gone soft, Dave Brewer, is added to the mix?

Between lust spells placed on her by Morelli’s crazy Italian grandmother Bella and her own family’s attempts at matchmaking, Stephanie is farther than ever from making a choice about who’s “the one.”

And that’s aside from all the zany happenings as Stephanie, along with her sometimes-loyal sidekick Lula, chases a fugitive vampire, a Russian drunk with a dancing bear named Bruce, and more.

But, more importantly, Stephanie has a killer after her.

Actually, there are three of them.

Bodies start turning up and Morelli and the police scramble to find a connection, especially when the killer starts addressing the bodies to Stephanie.

On top of all that action, a ghost from the past returns to haunt Stephanie. And a crazy ex-wife with a Lexus rounds it all out.

Memorable characters that would drive any one of us nuts if related to us make the story fly by with humor.

Lula is a cheeky favorite, but can never compete with the infamous Grandma Mazur. She’s sorely lacking in scenes, as compared to previous books.

This time, though, Stephanie seems more apt to realize just how crazy her life is.

Unfortunately, that doesn’t forgive that the storyline is completely unrealistic.

It’s just inconceivable how Stephanie manages to get herself into these situations time and time and, yes, time again.

If you can get past that and just enjoy the crazy plot as it comes, then this is a great book.

Comedy abounds, there’s a little, well, not romance exactly, but some semblance to it with Ranger, and there’s even some suspense.

The book is easily enough read even if you haven’t read any of the prior novels. But you may find yourself backtracking just to hear more about Grandma Mazur’s crazy antics.

“Smokin’ Seventeen” retails for about $15 at your local book retailer.