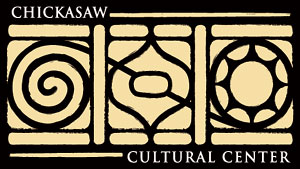 A group of OCCC international students cheered as the stickball instructor used a lacrosse-like stick to aim a ping-pong-size woven ball at his target. He hit the footlong red fish affixed atop the tall wooden pole at the Chickasaw Cultural Center.

The students visited the center located near Davis in April.

The students got an in-depth look at Native American culture as they toured a historically accurate replica Chickasaw village, tried their hand at stickball and experienced a state-of-the-art museum exhibit.

The students, who are all studying English as a second language, left campus on a Thursday morning in April and headed south on Interstate-35 toward Davis. Upon arrival, they were greeted by their guide for the day, Steven Nail.

“He was very charming and helpful,” said Marciya Khosravinejad, a student from Iran.

A citizen of the Chickasaw Nation, Nail led the students past a large bronze statue of a Native American warrior. He stopped briefly to explain the history of the Chickasaw removal from their homelands in the southeastern U.S. and their relocation to what would later become Oklahoma.

Nail then led the students to the village. Here the students watched several Native American dances, and even participated in a few themselves.

Following the dances, Nail and another guide taught the students how to play stickball, a traditional Native American game played with two sticks and a woven ball. For the next 10 minutes, the students used the sticks to throw the ball at the fish attached to the top of a large pole, with no success. “It was very hard,” said Iaan Hernandez, a student from Mexico.

After some good laughs and some good tosses, Nail then took the students inside for lunch. Afterward, Nail led the group to the museum portion of the facility.

Here the students watched a video on the history of the Chickasaw nation, walked through a high tech room designed by Disney to resemble a forest and soaked in an exhibit hall full of historic Chickasaw artifacts.

“I liked the guns and the antiques,” Hernandez said, “and [seeing] the instruments that the Indians used.”

Nail then led the students to an exhibit hall filled with Native American artwork, which was their last stop.

Before they left, Nail took the students back to the warrior statue for a picture and a final wrap-up of the day.

Nail told the students that the Chickasaws do not have a word for “goodbye” in their language. He said that, instead, the Chickasaw people say, “Until I see you again.”

So telling the group that he was glad they came, he bid the students “until I see you again.”

For more information about the ESL Bridge program contact professor Abby Figueroa. She can be reached by calling the OCCC Division of Arts at 405-682-7200.