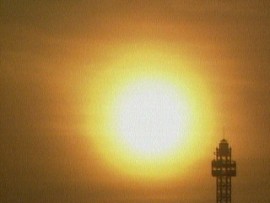 Rising heat on the OCCC campus and through the metro is becoming potentially deadly.

Brent Stafford, Professor of Emergency Medical Sciences,  said everyone should take precautions and be aware of the health warning signs, .

Stafford said the campus community should be aware of the three styles of heat emergencies and prepare for spending time in the heat.

Also, they should be sure to not leave their children in parked cars for any time alone.

“It would take only minutes for the situation to become serious,” Stafford said.

The same would go for pets.

In all heat emergencies it’s important to cool off as quickly as possible. However, Stafford said there is one thing that you do not want to do. He said dunking someone suffering from a heat emergency in ice water is not advisable.

Stafford is a many-year Nationally Registered Paramedic. He said anyone who comes to campus during the summer may face heat cramps if they stay out in the heat for even a short amount of time.

He said cramps are caused by water and salt loss from sweating. If caught in time these effects are easily reversible by getting into a cool, non-humid atmosphere and by rehydrating.

If you experience heat cramps while on campus your best bet is to get inside one of the buildings, Stafford said.

He said if you are able to make it inside on your own and can manage to get some hydration there is no need for campus police or medical assistance at this time.

A more severe threat comes in the form of heat exhaustion.

When outside in the heat, it is important to remember to stay hydrated. Without proper hydration an individual can be in danger fast.

Those suffering from heat exhaustion may have symptoms such as profuse sweating and severe cramps along with nausea and vomiting, Stafford said.  He said that if anyone experiences nausea, diarrhea, or fainting after being outside, they should seek medical care for IV therapy treatment immediately.

Stafford also said if someone is nauseated not to give them anything by mouth. He emphasizes that nausea is a strong sign of a dangerous heat emergency.

Campus police said the campus has not had any incidents of heat exhaustion reported yet this year, according to Lt. Christopher Tipton.

Stafford said heat emergency issues can become much worse if one suffers a heat stroke, the final and most severe stage of heat emergencies. He said once the situation has progressed this far, you will no longer be sweating and you will be hot to the touch. Your body temp can be as high as 105 degrees.

Stafford said it is a bad idea to submerge anyone with these symptoms into ice water. Rather, get a cool towel or towels and make cool compresses with the towel all over the patient’s body. At this point it is an extreme emergencies and campus police need to be notified.

Fear of the heat, and the dangers that come with it has students, staff, and faculty altering their days to try and stay out the heat.

Many students discussed how they are coping with the rising temps.

Business major Brandon Gowens said he tries his best to stay hydrated and indoors during the heat of the day.  He said he arranged his schedule so he attends classes in the morning to avoid the rising heat of the middle of the day.

Director of Facilities Management Michael Mondt said that he tries to make sure that workers on campus are properly clothed and hydrated for the heat and outdoor work.