I’m a self-admitted lame app user. I never get new apps. I use the same few apps over and over — and over.

After having a smartphone for a little more than a year, I find that old apps die hard. Many of the apps I continue to use have been around for ages and are still wildly popular among smartphone users. 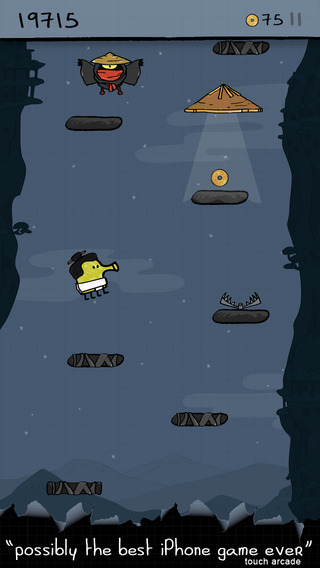 Some of these apps are pretty standard, such as Twitter, Instagram, YouTube and FaceTime. Some apps also are the dominant of their type, like the ESPN app (which is lame but still better than their website), Apple’s Podcasts app and the Weather Channel app.

However, when it comes to games, there are very few standards. Many games have a very short half-life, and quickly find their way out of the spotlight, e.g. “Flappy Bird.”

So when a game dominates the cellular medium, it can make as many waves as games made for Xbox and Playstation consoles, and is played for years on end. Thus is the case of “Doodle Jump.”

“Doodle Jump” is a simple game, as many popular mobile games are. The point of the game is to tilt your phone so the jumping character continues to climb the platforms. Sometimes you have to tap the screen to shoot at monsters. Like I said, not complicated.

Sure, the game gets harder the higher you go up. More monsters, fewer platforms to jump on, these platforms move. But ultimately, the purpose of the game stays the same: jump on platforms, climb higher and higher until you fall.

Co-creator Igor Pusenjak claims the game has had more than a quarter of a billion downloads across all platforms. If his statement is true, the game would be played more than all versions of Nintendo’s “Mario” franchise.

Even if it isn’t true, the game has definitely been downloaded tens of millions of times, which is still a lot.

You can find this time transcending game on your local mobile app store for free, and for $.99 to remove ads.